Store Page
Hearts of Iron IV>  Workshop > Edouard_Saladier's Workshop
This item has been removed from the community because it violates Steam Community & Content Guidelines. It is only visible to you. If you believe your item has been removed by mistake, please contact Steam Support.
This item is incompatible with Hearts of Iron IV. Please see the instructions page for reasons why this item might not work within Hearts of Iron IV.
Current visibility: Hidden
This item will only be visible to you, admins, and anyone marked as a creator.
Current visibility: Friends-only
This item will only be visible in searches to you, your friends, and admins. 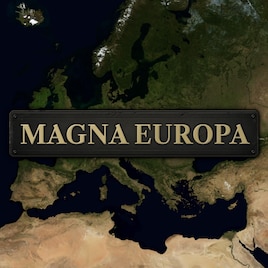 Valtiel
Online
See all 249 collections (some may be hidden)

This item has been added to your Subscriptions. Some games will require you to relaunch them before the item will be downloaded.
Description
Presentation
Magna Europa is a Hearts of Iron IV modification aiming to transform the standard Earth map into an "Europe Only Map" which span from Iceland to the Urals, and from Finland to the Suez Canal. It uses the "Lambert Conformal Conic" ETR-89 projection (recommended officially by the EEA), which preserve the shape of countries in Europe, at the cost of distortion in the Southern hemisphere and at the borders of the map (which is why Kazakhstan reach the North of the map. \n This is the alpha release of this mod, after 8 long months of development.
Team members:
Edouard_Saladier: Project lead, main coder and creator of the map
Izzoi: co-founder, provided great help in most areas
Blue Foxy: coding help and flag help, he was very useful ^^
Frenchie: map maker, ported most of the states from Vanilla, thanks a lot!
LolloBlue96: map maker and coder, provided excellent help on Italy
Watt: drew most of the rivers by hand, thank you Watt!
Skpr: VP work in Spain and Soviet Union
Special thanks to the HoI4 mod Coop, which provided great help and advices, especially related to scopes, thanks to all member of the Coop ^^
For more information, you can read the decisions available ^^
Finally; we have a Discord server, feel free to go there: https://discord.gg/WFC8FdNZT5
Intent of the mod and submod policy
Magna Europa has been created as a base for future modding teams to build over. Therefore, this is a free ressource, that anyone can use, as long as they credit the original mod. You are free to do any submods or total conversion mod over it. \n The reason behind all the development done so far is to have a fully playable map: I have already done some map ressources before, but because of the involved difficulty in using these, nobody has ever done a map using them (apart from Primo Victoria, still in development, check these lads on the Coop, they do great stuff). Therefore, whether you want to make a post-apocalyptic map, a WW2 mod focused on Europe or a border-gore simulator, go ahead, you have my blessing. ZackeryC aka ZC is not allowed any use of these files.
How to make a mod like this
If you are interested in making a new total conversion mod using a brand new map, I have already made a series of tutorial video explaining how to do it. These videos, along all the relevant links, are available on the Hearts of Iron IV workshop: under a resource called "America Map Resource - Tutorial" Although the audio quality is quite bad, it's the best I am able to do atm. However, if you need help for any map related problem, feel free to ask me for advice, I'll provide it when I'll be available
About Future Improvements
I am very well aware that this mod is incomplete. While it is playable, it features much less content than the vanilla game, and some areas are lackluster. While I did my best to add all possible accurate WW2 borders and allow their reproduction in game, the number of state has been greatly cut down: we had a version with 1500 states, however, the lag became soon unbearable, and it has been decided to restart the mod from the beginning, which is why we only have 450 states at the moment. Additionally, our team is currently very small, with merely 5 members, who are not always active due to IRL time constraint. Therefore, we are open to anyone willing to help the mod, and any help would be greatly appreciated. Additionally, submods are greatly appreciated, and if they are working well and provide good content, we are open to the possibility of integrating them (if their creators are ok with it of course).
Popular Discussions View All (4)

Mogambo Jan 11 @ 1:11pm
This needs an update! I would love to try it but it crashes all the time. I can't start it, Please notify me when this is updated