Store Page
Tabletop Simulator >  Workshop > jrw's Workshop
This item has been removed from the community because it violates Steam Community & Content Guidelines. It is only visible to you. If you believe your item has been removed by mistake, please contact Steam Support.
This item is incompatible with Tabletop Simulator. Please see the instructions page for reasons why this item might not work within Tabletop Simulator.
Current visibility: Hidden
This item will only be visible to you, admins, and anyone marked as a creator.
Current visibility: Friends-only
This item will only be visible in searches to you, your friends, and admins. 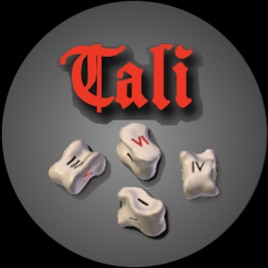 jrw
Offline
See the collection (may be hidden)

This item has been added to your Subscriptions. Some games will require you to relaunch them before the item will be downloaded.
Description
Tali, the Roman game of knucklebones with micro-roleplaying. Featuring the tactile feel of simulated Bones and metal coins. Play 1 of 10 Historically based Characters, each with their own special abilities.

This VRGames / VR-Soft.com Tabletop game was released to the public in the physical form late March 2020. Now available as in a digital form on Tabletop Simulator.

Helping bring History back to life. Tali, recreates the knucklebones game of gambling as the Roman's used to play it. Knucklebones is the ancestor to dice, before there were dice. The Romans would sometimes mark the knuckle bones with different roman numerals on each side, I,III, IV and VI. The roman numerals would then be used to score the throw of the bones. Roman soldiers would spend many hours playing Tali and gambling away their pay. A micro role-playing game has been added to the historic base game, in which each player selects a historic character from 1000 AD to play. Each character is given a rich background and a set of powers / capabilities to help them win in Tali. Are you feeling lucky? Are the gods with you tonight?

The rule book contains several optional rules (like house rules) for customizing the play, including a rule to reward role playing your character by which everyone will vote each round to give a silver piece (worth 5) to the one with the most votes.
Popular Discussions View All (1)

Onde Numse May 21, 2021 @ 4:04am
I might need to clarify:
The thing I need to change myself is in the "skin". That's no problem for me.
The thing I'd need help with is the 3D model (the numerals modelled into the faces), which I'd need to have removed so the faces are smooth.

Onde Numse May 21, 2021 @ 4:02am
Hi there, jrw.
I really like the 3D Models you've made for the "bone dice", and I'd love to use them for my role playing campaign on TTS.
The only thing is that the Roman numerals "carved" (modelled) into the bones prevent me from changing the numbers to the icons I'd need to use instead.

Do you, by chance, happen to have a version of the bones in your archives that have "smooth" faces (no numerals carved into them)?
And if so, would you upload a mod with just them?