Store Page
Arma 3>  Workshop > CannonFodderMK4's Workshop
This item has been removed from the community because it violates Steam Community & Content Guidelines. It is only visible to you. If you believe your item has been removed by mistake, please contact Steam Support.
This item is incompatible with Arma 3. Please see the instructions page for reasons why this item might not work within Arma 3.
Current visibility: Hidden
This item will only be visible to you, admins, and anyone marked as a creator.
Current visibility: Friends-only
This item will only be visible in searches to you, your friends, and admins. 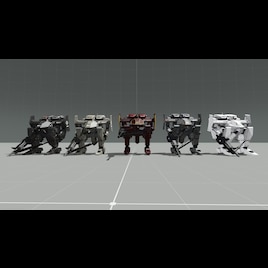 This item has been added to your Subscriptions. Some games will require you to relaunch them before the item will be downloaded.
In 1 collection by CannonFodderMK4
Degenerate Custom Mods

6 items
Description
Mod Description
"In 2018, the British military began experiments to create super soldiers for her majesty's commandos.
The results were disappointing and the program mothballed along with its specimens. These specimens promptly escaped from a maximum-security garden shed into the Yorkshire country side.
Still wanted by HM Revenue and Customs, they survive as soldiers of fortune. If you have a problem... if no one else wants to help... or you're on a budget... maybe you can hire.
The Degenerates."

Disclaimer
This mod requires the original HMCS as all parts barring the new textures and some scripting differences are dependant on the original mod.

Thanks
I would just like to use this part here to thank the original creator of the HMCS Addon, chkw30k, for making a mod that is actually possible to read and pull apart for reskinning purposes. It's modders like them that let me sleep at night :D