Store Page
Tabletop Simulator >  Workshop > Battlespace's Workshop
This item has been removed from the community because it violates Steam Community & Content Guidelines. It is only visible to you. If you believe your item has been removed by mistake, please contact Steam Support.
This item is incompatible with Tabletop Simulator. Please see the instructions page for reasons why this item might not work within Tabletop Simulator.
Current visibility: Hidden
This item will only be visible to you, admins, and anyone marked as a creator.
Current visibility: Friends-only
This item will only be visible in searches to you, your friends, and admins. 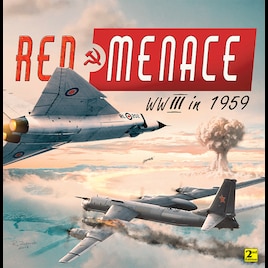 Maverick
Offline
See all 6 collections (some may be hidden)

This item has been added to your Subscriptions. Some games will require you to relaunch them before the item will be downloaded.
Description
Red Menace is a solitaire wargame pitting the strategic nuclear and defensive forces of the United States, Canada, and the United Kingdom against those of the Soviet Union and its client state, Cuba, in 1959. The game focuses primarily on the role of strategic bombers, but other types of supporting aircraft such as Interceptors, Airborne Early Warning, and Aerial Refueling Tankers are also represented. The player takes control of the United States, Canada and United Kingdom. Decisions for the Soviet units are made by the game system using random events and dice.

This module does not include the rules or scenario book.

For rules and scenarios, you must own a copy of Red Menace 2nd edition from Wargame Vault or The Game Crafter. Support Battlespace Games using links below: