Store Page
Divinity: Original Sin 2 >  Workshop > Odinblade's Workshop
This item has been removed from the community because it violates Steam Community & Content Guidelines. It is only visible to you. If you believe your item has been removed by mistake, please contact Steam Support.
This item is incompatible with Divinity: Original Sin 2. Please see the instructions page for reasons why this item might not work within Divinity: Original Sin 2.
Current visibility: Hidden
This item will only be visible to you, admins, and anyone marked as a creator.
Current visibility: Friends-only
This item will only be visible in searches to you, your friends, and admins. 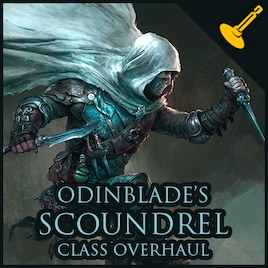 45 items
Description
This mod requires Norbyte's Script Extender[github.com] and OdinCore - Mod Services to use.
Cunning, deceptive, and visceral; an expert Scoundrel always gets their mark. This mod overhauls all existing Scoundrel skills, as well as adding plenty of new ones into the mix, to deliver a truly devastating Scoundrel skill tree.

As stated above, this overhaul requires Norbyte's Script Extender[github.com] as well as OdinCore - Mod Services to use.

How do I install it?
Check out my installation guide here. Alternatively, if you are using LaughingLeader's excellent Mod Manager[github.com], you can simply click the "Tools" option at the top of the window, and then click "Download & Install Osiris Extender". Easy peasy!

Core Mechanics
Scoundrels are well-known for having a few tricks up their sleeve. The toolset provided by this overhaul will give you a plethora of tools to design and decimate with your own playstyle. Here are a couple of the core mechanics this overhaul leverages:

Skills
The new skills and mechanics introduced in this overhaul are designed to feel unique and engaging. The AI utilises a large number of the new skills but does not utilise the Combo mechanic.

CLICK HERE TO VIEW THE SKILLS[docs.google.com]
As a comprehensive overhaul, this mod also reworks a lot of the base game Scoundrel spells, and I have compiled these changes into a doc:

Lina the Deft is a tricksy thief, and she is able to sell the party skillbooks (which she has rather questionably obtained). Lina may be found throughout the game in various locations:

Basegame Scoundrel vendors also stock the new skills, and the new vendors can be toggled on/off whenever you like using the Odinomicon mod settings menu from OdinCore.

NOTE: THIS MOD IS NOT COMPATIBLE WITH THE CLASSIC VERSION OF THE GAME. ATTEMPTING TO USE THIS MOD IN CLASSIC WILL LIKELY CAUSE BUGS AND ISSUES.
Popular Discussions View All (4)

RoyalCommander Aug 9 @ 7:59am
First of all, great mod i really like it.
2nd i think "outmaneuver" isnt working as intended, at least not for me.

I play a rough with 2 Knifes and once i use outmaneuver and the enemy acutally attacks me with a dodgeable attack of anykind i simply dodge but do not counter attack.
Never have i seen one counter attack to be precise, is there a condition that im not seeing like not having my own dodge of is it only working onehanded? :(

Глист- программист May 1 @ 3:54am
does not display descriptions of additional effects in other languages ​​than English, the effects work but they are not visible, how to fix this?

Freckled Banana Mar 2 @ 10:41am
Does Odin still mod for this game? I would love to see his take on Polymorph :)

DreXav Feb 23 @ 9:44am
@Harold Smith @Star-X: how does warfare need an overhaul? More cool classes would be good, but warfare is pretty damn strong, isn't it.

Harold Smith Sep 21, 2021 @ 11:01am
Warfare overhaul? The community needs a formal update instead of blatant silence.

AntiJudas Sep 14, 2021 @ 1:57pm
Little question : I play in french, and all your other mods puts skills description in english when there are changes on them (which is good), but in this mod the base game have no changes in their text so I cant see the new effect / combo effect, is there a way to put only spells in english so it uses their english description (that shows the changes), or is it a problem with the mod itself ? Aside from that, really good mod, hope you will do warfare or poly in the future

Also Polymorph, but frankly I'd rather see Warfare first since it's the most in need of significant buffs.
< >