Store Page
Garry's Mod>  Workshop > Clamcy(chill)'s Workshop
This item has been removed from the community because it violates Steam Community & Content Guidelines. It is only visible to you. If you believe your item has been removed by mistake, please contact Steam Support.
This item is incompatible with Garry's Mod. Please see the instructions page for reasons why this item might not work within Garry's Mod.
Current visibility: Hidden
This item will only be visible to you, admins, and anyone marked as a creator.
Current visibility: Friends-only
This item will only be visible in searches to you, your friends, and admins. 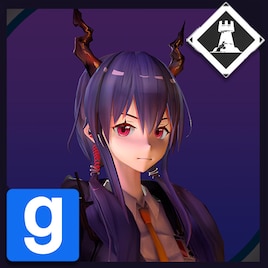 Clamcy(chill)
Online
See all 1100 collections (some may be hidden)

This item has been added to your Subscriptions. Some games will require you to relaunch them before the item will be downloaded.
Description
Personality:
Operator Overview:
"Such evil must be stopped, and by any means necessary."

Onee-san, tsundere, waifu, and all-around badass of the early Arknights story, Ch?en is not just a high-ranking Lungmen official but also a 6? Specialist
Dualstrike Guard with an outstanding and diverse kit.

Of her two Talents, Ch?en?s first, Scolding is potentially her most potent: it causes all allies with Skills of the ?Attacking Enemy? or ?Getting Hit? SP Charge Type to gain 1 SP every 5 seconds. This can be used solo or stacked with other SP-gain abilities to allow more frequent Skill use. Just call her the SP Energizer Bunny (though maybe not within her hearing).

Along with her trait that allows her to deal damage twice with each attack, what makes Ch?en so unique is the variety and effectiveness of her Skills. Her role in battle changes based on the Skill she uses, and she is solid at all of them.

Her Skill 1, Sheathed Strike, boosts her single-target DPS with a nice Attack steroid and adds fairly consistent stuns.
If she equips her Skill 2, Chi Xiao - Unsheath, Ch?en turns into a multi-target burst assassin. The Skill deals a lot of Physical and Arts damage to multiple enemies in range (both ground and aerial!), and at max Skill Level it is available to use immediately on deploy.
Need some multi-attack burst with crowd control? Ch?en?s ready with her Skill 3, Chi Xiao - Shadowless, which divides several hits between targets over a large area and ends with a Stun. Use it and watch low-Defense bosses melt before your eyes!
Ch?en?s greatest weakness is that she hasn?t joined me yet pays for her amazing Skills by only being able to charge them when she is attacking. Although her Talent does soften the blow, it can be frustrating during breaks in battle watching Ch?en get no closer to her next Skill use while other Operators are charging. Ignore Ch?en at your peril, however. Given the chance, her skillful swordplay can completely dominate the battlefield.

Known issues:
I don't know how to to weight paint Urnal to fix the nasty twist in C_arms and also the model. I really need guide

Noted: This is the normal outfits for Chen not the summer by Pacagma

Credit:
Me: Turning it into player model
B L Λ Ζ Ξ: Thanks for his new proportion Script! ^^
R. Star?: For making the thumbnails :3
Sa-Daniel: 1st artwork
Model by 挺尸的baka