Store Page
Garry's Mod>  Workshop > sрy's Workshop
This item has been removed from the community because it violates Steam Community & Content Guidelines. It is only visible to you. If you believe your item has been removed by mistake, please contact Steam Support.
This item is incompatible with Garry's Mod. Please see the instructions page for reasons why this item might not work within Garry's Mod.
Current visibility: Hidden
This item will only be visible to you, admins, and anyone marked as a creator.
Current visibility: Friends-only
This item will only be visible in searches to you, your friends, and admins. 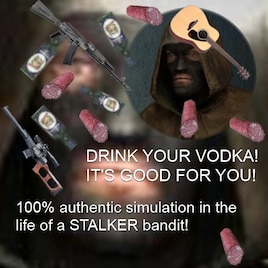 sрy
Online
See all 2152 collections (some may be hidden)

This item has been added to your Subscriptions. Some games will require you to relaunch them before the item will be downloaded.
Description
Welcome to Razborka!
This is a gamemode that is not meant to be taken seriously and is therefore meant for a goofy gameplay experience.
Nevertheless, the weapons were designed for a competitive style, namely in the vein of Counter-Strike.
The weapons do have ironsights, but their role is very minimal and therefore they're optional (and there are going to be situations where firing from the hip will save your life whereas ironsights won't) - it only provides a 15% recoil decrease, a slight zoom, a 50% decrease in spread when moving, and a slight decrease in movement speed.

So, without further ado, here are the features:
- 5 Game types! (Bandit War, Bandit Shootout, Steal the Vodka, Drunken Superiority and Death to the Vodka Thief!)
- 6 Primary firearms (including a guitar!) to choose from, with their own advantages and disadvantages, providing a unique gameplay experience!
- NO player classes! The primary weapon you select determines your 'class'! (aka weaknesses and strengths)
- A very light-weight weapon base that has dynamic accuracy, ironsights, custom viewmodel movement, damage-over-distance scaling as well as surface penetration and ricochet!
- A simple map and gametype voting system!
- Dangerous amount of russian in one package!
- Pain and death sounds from STALKER featuring Bandits!
- A talk menu with sounds from STALKER's Bandits as well as a unique CHEEKI BREEKI option which every Bandit adores and loves!
- Random profanity screams from STALKER's Bandits as you attack your enemies!
- Plenty of Bandit sounds to ensure hilarity and "replayability" (read: to make your laugh your ass off in case you're russian) value!
- Vodka and Sausage are your healing items!
- Only 1 custom map so far :(

And now a bit more about the game types:
Bandit War:
* Has 2 opposing teams
* Consists of 4 stages and a Rematch stage in case both teams win 2 stages
* First team to reach the specified amount of kills wins the stage
* The stages are: Fist-fight, Knife-fight, Fire-fight and WAR!
* During the WAR! stage players can use ANY primary weapon and during the Fire-fight stage all players are given a Makarov pistol
* Amount of Vodka and Sausage on spawn is gradually increased as the stages advance

Bandit Shootout:
* Imagine Bandit War, but with 100 required kills, all weapons allowed, only the WAR! stage and no Rematch stage

Steal the Vodka:
* Has 2 opposing teams
* All weapons are allowed in this game type
* The Attacking team has to steal all enemy vodka within the time limit
* The Defending team has to protect their vodka until time runs out
* If the Attackers stole vodka from the enemy team, the Defenders can steal it back
* Everyone starts out with 20% Vodka and 30% Sausage

Drunken Superiority:
* Free-for-all
* Fists only
* First player to reach a certain amount of kills in fist-fights wins the round

RECOMMENDED MAXIMUM PLAYER COUNT: 20 (but if you want, go ahead and host with a larger player count, it should work fine)

Console commands and variables:
razborka_gametype (server-side) - selects the game type to start with or change to once the round limit was reached. Available game type names: banditwar, banditshootout, deathtothevodkathief, stealthevodka, drunkensuperiority. If you set the variable to "any", then when the round limit gets reached, it will initiate a gametype vote.

Any servers for this gamemode?
FREMONT

A post for mappers (and potentially players too)
Kizzycocoa
< >
233 Comments