Store Page
Arma 3 >  Workshop > O.Martin [ANVIL]'s Workshop
This item has been removed from the community because it violates Steam Community & Content Guidelines. It is only visible to you. If you believe your item has been removed by mistake, please contact Steam Support.
This item is incompatible with Arma 3. Please see the instructions page for reasons why this item might not work within Arma 3.
Current visibility: Hidden
This item will only be visible to you, admins, and anyone marked as a creator.
Current visibility: Friends-only
This item will only be visible in searches to you, your friends, and admins. 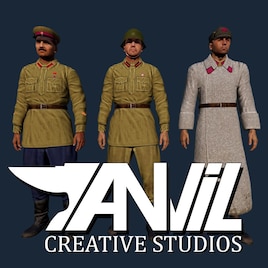 Spoks [ANVIL]
Offline
See all 358 collections (some may be hidden)

The idea of this mod was to create missing WW2 content. There was a significant lack of early soviet gear, that needed to be filled. We decided that this was our crusade!
We provide gear and equipment mostly used by Red Army 1935-1943. There is some also other stuff related to this period.

This is a standalone mod, no additional mods required. All our uniforms are compatible with IFA3 belts and backpacks.

Re-upload and changes in this mod are strictly forbidden!

We recommend using with mod :

BlackFalco Nov 8 @ 12:13am
Hi!
Do you know if there's any winter mod for US army and wermacht? With long uniforms/coats?

Turkmen 5G Oct 12 @ 4:10am
@O.Martin [ANVIL] if i may ask due diligence. will there be a possibility that i can use the shemagh in my Arab Winter mod with full credits given? (we can discuss this in further detail if you want to add me on steam).

Cutarrow Mar 7 @ 10:40pm
Is it possible that we can have a mod of similar detail and accuracy for the early cold war for instance like 1950-1960 love the mod there's just not a lot of early soviet uniform mods that i could find
< >