Store Page
Total War: ATTILA>  Workshop > Anisvara's Workshop
This item has been removed from the community because it violates Steam Community & Content Guidelines. It is only visible to you. If you believe your item has been removed by mistake, please contact Steam Support.
This item is incompatible with Total War: ATTILA. Please see the instructions page for reasons why this item might not work within Total War: ATTILA.
Current visibility: Hidden
This item will only be visible to you, admins, and anyone marked as a creator.
Current visibility: Friends-only
This item will only be visible in searches to you, your friends, and admins. 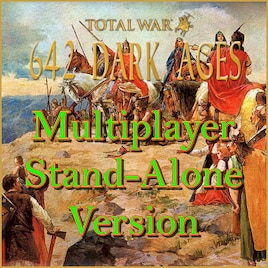 Anisvara
Online
See all 9 collections (some may be hidden)

This item has been added to your Subscriptions. Some games will require you to relaunch them before the item will be downloaded.
Description
- Multiplayer Version for 642 Dark Ages - Rise or Fall of Islam
- English language game settings are required!
- This version is for multiplayers and everyone who wants to play without the supply system. You can switch between the two versions. They are safegame compatible, but the supply script in the single player version prevents multiplayer modus!

Hints: The 642 Reskin submod and other mods should work for Custom and MP Battles. For normal campaigns you can use the allowed mods and all graphical stuff. As reported MP campaigns getting instabil when using mods. I am not a MP campaign player. 642 is running on Attila engine, so I am not responsible for potential crashs in MP campaigns (642 Dark Ages is running very stabil).

- Please take a look at your subscribed mods you use and give all of them a "Thumbs Up"!
- Play only Grand Campaign (642 - Dark Ages)!

AD642 - the whole world in crunch. The Arabs overran Palestine, Syria, Egypt and Mesopotamia and advanced to the Persian highlands. The showdown there is imminent. The Byzantine Empire, led by the 12-year-old child emperor Constans II, is on the edge of a catastrophe. The tribes are becoming renitent throughout Africa. The Avars rage in the Balkans and in Italy the Langobards are out for revenge. Furthermore Turk tribes threaten the empire. The Persians are also in a two-front war and lost areas in the north to the Göktürk Khaganate. After the death of King Dagobert, the Franconian Empire was divided into 3 allied realms, two are run by children. The Slavians have their first realm, Sámová Riše, and the Thuringians are insurgent. In Britain everyone fights everyone as usual.
< >
6 Comments

sam.pidgeon Mar 14 @ 3:43am
Anyone that wants bigger unit rosters in this mod can try out my submod pack it's made my campaign much more fun

Galestrum Oct 28, 2020 @ 10:23am
Awesome mod. I have always wanted a TW experience that covered this time period. Well done.

Anisvara  [author] Sep 15, 2020 @ 1:29pm
@Stiefellecker² - both versions are nearly indentical, this is without the supply script which hinders MP Campaign. I gonna write an additional hint! Thanks!