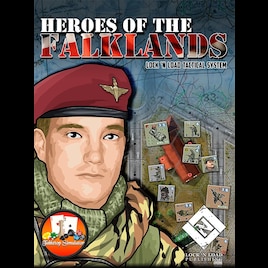 69 items
Description
Game Description:
Heroes of the Falklands brings you to the windswept, rocky landscape of the Falkland Islands—or Islas Malvinas, as they are known by the Argentines. The brief but brutal war in 1982 began after the Argentines unexpectedly seized Stanley, the capital of the Falklands, and the island of South Georgia from small garrisons of British Royal Marines. The British government responded by sending a large naval task force to the South Atlantic to reclaim the disputed islands. Here, the fierce ground combat that occurred during the war is depicted as only the immersive squad-level Lock ’n Load Tactical Series can.

The full copy of Heroes of the Falklands feature the Argentine seizures of Stanley and South Georgia and all of the major land battles, from the British Paras’ costly but morale-boosting assaults on Darwin Hill and Goose Green, to the daring commando raid on Top Malo House, across East Falkland to the climatic battles for the ring of hills around Stanley. Two what-if scenarios depict Argentine opposition to the British landing at San Carlos and a last-ditch fight for control of Stanley. Put on your cold-weather combat gear and bring along a pair of night-vision goggles: the fate of the islands is at stake!

The older 5.0 rules and 5.0 PACs have been saved in a separate crate inside the Admin Counters Crate on the table.

Special Thanks:
Many thanks to Tumba, here on TTS, for his marvelous ammo crates and dice tray.
Kudos to MadMark56, here on TTS, for his crate skins. They look superbe.
Bravo Zulu to Mangofeet (here on TTS) for his awesome Stack Exploder mod and to Caprica55 for suggesting it.
Cheers to Lily, here on TTS, for the ever awesome Kraken table.
Gratz to all Board Game Geek members for their continued efforts to provide images and resources to aid us in our TTS endevours.

Notes:
If you like this mod then please remember to rate it or even add it to you favourite list. This kind of support will go a long way towards providing additional mods in the near future.

Enjoy and please comment if you have any questions or concerns regarding the mod.

Richthofen56  [author] Jun 16, 2020 @ 8:11am
I'll have a look Caprica. I'm on that page as well. Good luck with the modding. I find it really fun if not a little repetitive uploading a bazillion counters...lol. The LUA scripting I haven't really looked into although I have a little coding background as well. Not really worth all the effort IMHO. I find it also detracts from the "feel" of playing a real game when one button loads a whole scenario, etc. I like to do those things manually with my opponent as a social aspect of the game. You can also setup a scenario once and then simply save the game to use at any later date. Opinions differ though :)

Caprica55 Jun 16, 2020 @ 7:56am
I am getting into creating mods myself and diving a lot deeper into TTS. I have learned a lot from looking at other people mods, and I am learning how to create higher resolution assets (especially cards). I can modify scripts since I have a developer background but have not delved too deeply into lua. I left a comment on the TTS Facebook page regarding David Heath's post laying out his plans for the future with TTS. Very exciting! My comment is under Tomi Arturo (an alias) :)

Richthofen56  [author] Jun 16, 2020 @ 3:11am
Nothing wrong with that and a great idea. What we don't want, as mentioned above, is people posting that stuff. BTW, with your extensive experience, I expect some feedback if you find anything missing or incorrect. There's a lot of counters in there and I'm pretty sure 1 or 2 may be AWOL :) A second experienced set of eyes is always welcome.
< >