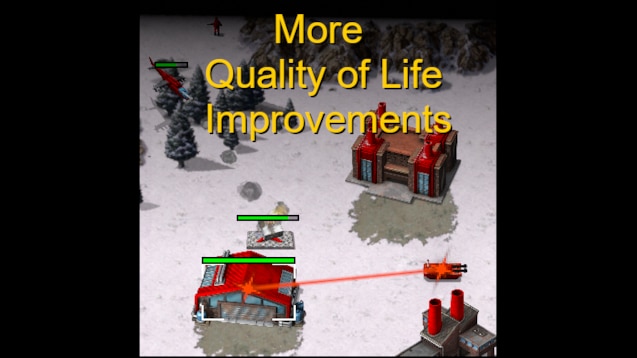 Rampastring
Online
See all 44 collections (some may be hidden)

This item has been added to your Subscriptions. Some games will require you to relaunch them before the item will be downloaded.
Description
Compatibility with September patch
This mod is compatible with the September patch for the C&C Remastered Collection. Jimtern of EA has given the following instructions for updating the mod to the latest version:

More Quality of Life Improvements
A simple mod that adds more quality-of-life improvements to the game. Does not add extra units or direct gameplay changes, so you get the true original experience, just improved. Currently includes the following enhancements:

In the original game, harvesters preferred harvesting ore patches to the north of their position. This mod makes them harvest the ore patches closest to their last refinery instead, which helps keep your harvesters safe and keeps the money flowing faster as the harvesters have a shorter path to home.

If you have multiple bases or a very large base, harvesters will now stick to using the closest refineries instead of wandering all around the map to reach any free refinery. Harvesters also act smarter when sharing a refinery, allowing the closest harvester to always unload first, without needing to wait for a distant harvester to reach the refinery first (this feature is also known as harvester queue jumping).

Harvesters also don't start idling anymore if their refinery gets destroyed while they are on their way to unload, but will instead find another refinery to unload to.

And finally, when the map runs out of ore, the harvesters won't stay idle permanently, but will periodically scan if more ore has spawned on the map (from ore mines). This also affects the Skirmish AI and makes it a bit less braindead in the late-game.

Pathfinding
Improves pathfinding by implementing the A* algorithm. Units will no longer hug cliffs and other obstacles, but move through the most optimal path. Special thanks to cfehunter for implementing this feature to TD, which I could then port to RA.

Rally points
You can select a building and then click on the ground to give produced units a rally point, like in Red Alert 2 and CnCNet Tiberian Sun. This works with barracks, war factories, naval yards / sub pens and also repair bays. You can also hold ALT while giving the rally point to set the rally point to a unit or other object. Thanks to cfehunter for his work on the same feature for TD.

Modern Wall Building
You can now chain-build walls as in Tiberian Sun and Red Alert 2. To offset that this practically makes building walls cheaper, walls have been made 3 times more expensive. Each wall piece also doesn't refund the full cost of the buildable wall object, but only one-third of it. You can still sell walls in missions for extra cash as in the original and retain the original wall balance, while enjoying faster wall placement. Special thanks to pchote for his Modern Wall Building mod, from which I adopted the code for this feature.

Config file
Not a fan of all of the features? Interested in customizing their behaviour? In the mod folder, there's a sub-folder CCDATA, and there resides MOREQOL.INI. Modifying it allows you to fine-tune the features of the mod to your liking, or even disabling some features entirely. The file is well commented and acts as an extension to Rules.ini, so you can also use it for introducing any kinds of Rules.ini changes.

Where is the mod folder?
Look into the directory where you installed the game through Steam. In the same directory there is a "workshop" folder, and under that there's a "content" folder from where you can navigate to the remaster's workshop content. Usually this is a file path like the following:

Future plans
While I've greatly enjoyed the Remastered collection, I've largely moved on to newer C&C games and so I'm re-focusing my C&C modding efforts on other projects, most notably
Dawn of the Tiberium Age. I don't rule out working more on this mod in the future, but currently I have no active plans to develop further features for this mod. However, I will keep this mod up-to-date and compatible with the latest version so you can keep enjoying it as it is, even if more patches for the Remastered Collection are released.

Despite my departure, the modding capabilities of the Remasters are definitely intriguing. If I continue modding the Remasters one day, I'll likely be improving the AI as well as the game balance and will likely use this mod as a base.

How do I install this?
Berzeger

Is it possible to add these three features?
cat.sitter
< >
293 Comments

cobber51 May 4 @ 6:53am
Try CFE Patch Redux, or Veterancy mod for these sorts of QoL improvements in Tiberium Dawn, because this mod has never been ported to TD, as far as I know anyway.

Mkilbride May 4 @ 6:11am
Tiberian Dawn version?

Nod Feb 23 @ 3:53pm
i dont know why but your mod causes my game to crash even with un and reinstaaling the mod

SpuddyMcNuddy Dec 25, 2021 @ 11:36am
Not sure why, but my ore harvesters as well as the AI's harvesters keep going to the other side of the map to get ore? Has only happened since using this mod.

Ranazomic Dec 10, 2021 @ 1:56pm
Awesome mod, may i request a another mod there optimize the game performence as many users have issues with the game being laggy

I think its not an excuse to leave a game with several issues because it used to be like that in the 90's.

FizzlePopBerryTwist Aug 14, 2021 @ 10:16am
This should be part of the real game :I
srly
we wanted this since PSX
worst case: option for ON and OFF