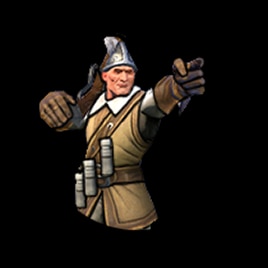 ashwood
Offline
See all 8 collections (some may be hidden)

This item has been added to your Subscriptions. Some games will require you to relaunch them before the item will be downloaded.
Description
Adds up to 22 "new" Units by allowing you to steal / hire Civ unique units as mercenaries.

Every time you conquer a civs original capital, OR eliminate a civ from the game, you gain access to their unique unit (with the proper tech / buildings in your cities).

Works with either Base Game, RF, or GS

Supported Units (RF)
All Base units +

How to use
Step 1: Conquer a civs original capital OR eliminate the civ from game by capturing their final city.
Step 2: Build the required district or Merc company building in your cities.
Step 3: Research the tech needed for the unit.
Step 4: Train the unit in all cities with the Merc Building from step 2
Step 5: Conquer your enemies!

Note: The AI will also use this, so expect to see them training and using units of those they've conquered.

Historical Context
Throughout history conquering nations have adapted the vanquished into their own armies as mercenaries. During the wars of Alexander the great, his Macedonian armies included Greek hoplites, Romans used Gauls and other conquered "barbarians" as forced levies and mercenaries, and of course the English used and incorporated the welsh longbow and Scottish Highlanders into their regular fighting forces.


Please feel free to support my other mods / projects as well...
https://steamcommunity.com/sharedfiles/filedetails/?id=2094532267

RambelZambel Oct 11, 2020 @ 2:21am
when i start an era after acient i can build all mercbuildings, and in ancient i saw korea with the merc chariot archer

RambelZambel Oct 11, 2020 @ 2:21am
the barbarian spearmen is now the greekhoplite
and conflicts with warfare mod i think, cause it alters the units.sql(or xml?), unitvariation tries to display 2 skins at the same time on some units

Junky Aug 18, 2020 @ 4:39am
@Jimbo
A problem that is good to know Thanks. I use this mod actually and it's awesome. Really.
Unfortunetly not all units are inserted. Miss the hwacha unit at the moment. But when I conquer the next one i will miss another unit.
I would really appreciate if development of this mod continues.

Jimbo75 Aug 17, 2020 @ 12:56pm
It's a neat concept, but now I'm seeing city-states give quests to train mercenary units. Vatican City has asked me to train a Merc Varu, which could only happen if I took over India.

EmyLily Jun 14, 2020 @ 2:53pm
might need to just make the support for steel and thunder as a separate mod that requires it? its the simplest way at least.

ashwood  [author] Jun 14, 2020 @ 1:54pm
Just added some more units, I will add the player limits with next update. I can try and add support for steel and thunder later on, might be difficult though, I tried to do it before with another mod using mod triggers, but it didn't work. Will need to look into that more in future.

EmyLily Jun 13, 2020 @ 8:55am
ooh yeah i like a limit of merc buildings, that way if you can build like two, you get some good variety but without getting out of hand. Also yeah steel and thunder UU units would be nice in the future, once youre done with standard mod.

prckt Jun 13, 2020 @ 2:16am
Great Job, thank you a lot (waiting fir this for a long time) !! I wonder (wishlist..) if it is possible to extend it to the UUs of steel and thunder unique units? and whatever the conquered city?

ashwood  [author] Jun 12, 2020 @ 6:28pm
Thank you. Yes I plan to update with some more units over the weekend. I tired to balance it a bit by making these merc units slightly less powerful then their original counterparts, with a slightly higher maintenance. I may also limit the amount of merc company buildings per player in future, this will balance it out even more.

EmyLily Jun 11, 2020 @ 10:38pm
oooh this is an interesting concept, might be a little op in domination victory, but just the flavor of using units of those you conquered is so cool. Cant wait for more civs to be included.
< >