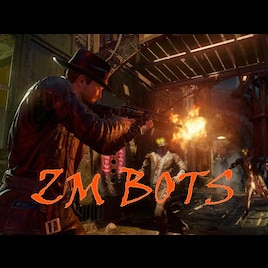 UnDeaD
Offline
See all 122 collections (some may be hidden)

This item has been added to your Subscriptions. Some games will require you to relaunch them before the item will be downloaded.
Description
What is this?
A mod that adds bots to Zombies. It's aim is to occupy free player slots with bots that (try to) act like real players.
The mod can be played alone, in split-screen, with friends or even in offline. It supports every original map and most of the custom ones.
This mod is an extended and modified version of Team Bots for ZM.

Bots are able to:
They have:
Bots can buy perks:
Controls:
Press 3 to select bot / all bots.
Press 4 to cycle between behaviors.
Press V and SPACE to toggle powerup seeking.
Press V and C to pause the game.
Controls are also indicated at the start of the match.

Originally posted by WarpSpider:
Make sure not to activate splitscreen until in the Zombies lobby and make sure "Player" is first (on top) and "Player1" is below on the player list.

Notes:
IMPORTANT: Do NOT use developer mode!
If bots don't spawn, then your Player Limit is most likely set to 1. Just change it to the desired number.
If you have any problems, just comment in Bugs & Issues section and I will respond to it when I have time.

Thanks to:
If you like this mod, don't forget to:

Have fun!
Popular Discussions View All (4)

UnDeaD  [author] Aug 9 @ 10:22am
No, they can only get normal weapons, which can be acquired from the box (plus the Ray Gun and Mk II which are the only exceptions).

GioGio Aug 9 @ 2:59am
i have a question...can the bots drag wonder weapon like origins staffs or shasows of evil's swords?

UnDeaD  [author] Jul 20 @ 12:37am
I tried to get the bots to shoot Margwa's head in the past but without luck. I might try it again this weekend.

@Kmart & @oodoctorogre2: It's hard to find a good balance in bots health; on maps that have narrow spaces they can get downed easily, but at the same time, on maps that have bigger open areas (where bots can run around) they are hard to kill. Perks can also affect bots significantly.

Kmizzle Jul 19 @ 1:25am
I have the opposite problem, mine always die especially on big maps like Origins... they'll mow down all the hordes for the first 8 rounds then everything goes south

oodoctorogre2 Jul 19 @ 1:19am
Just got done playing a few games, really fun stuff! Any chance you could release a version with them having regular player health or at least a less buffed version of the zombie health increase formula? They're fun but at later levels they get swarmed and never die haha

UnDeaD  [author] Jul 17 @ 6:22am
They use knives unitl round 10, but they will still use it while insta-kill is active regardless of round. I noticed that they suck at shooting zombies point blank, so knifing them instead (when the circumstances are met, see above) seem to be more effective.

⭐NeralEthical⭐ Jul 14 @ 2:20pm
Can you make it so bots won't knife on later rounds? They end up killing themselves trying to melee zombies right in front of them when they have a powerful weapon in their hands.