Store Page
American Truck Simulator >  Workshop > gabenz88's Workshop
This item has been removed from the community because it violates Steam Community & Content Guidelines. It is only visible to you. If you believe your item has been removed by mistake, please contact Steam Support.
This item is incompatible with American Truck Simulator. Please see the instructions page for reasons why this item might not work within American Truck Simulator.
Current visibility: Hidden
This item will only be visible to you, admins, and anyone marked as a creator.
Current visibility: Friends-only
This item will only be visible in searches to you, your friends, and admins.

gabenz88
Offline
See all 675 collections (some may be hidden)

Compatible game version: 1.44
The mod also works on older versions, but may have issues or errors in the game log.

This mod adds police cars with matching liveries to almost every city in California, Nevada, Arizona, New Mexico, Oregon, Washington, Utah, Idaho, Colorado and Wyoming.
The cars have various wheel, rambar/pushbar and lightbar combinations .
The mod removes the original police cars from the states made by SCS and replaces them with the cars in this mod, however the SCS Taurus with the open door can appear in the random event accident.

For owners of Special Transport DLC:
Front escort cars have been replaced in the forementioned states with state police variants from this mod. 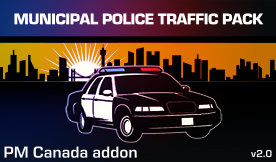 The mod replaces the parked US Border Patrol cars on the US side of the border with US CBP Field Operations cars (Ford Taurus, Ford Explorer '13 and '16, Dodge Charger '12 and '15).

All the needed cars are included in the main mod, therefore Municipal Police Traffic Pack is required for this mod. 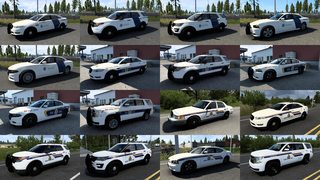 Possibility of expanding to fire and EMS vehicles
PieTwins

halbtollekreatur 12 hours ago
Looking forward to see what cars you will create with Montana DLC. My feeling is that it comes this summer.

halbtollekreatur May 29 @ 1:41pm
Would it be a option to use this two mods together or implement such a option into your mod?

halbtollekreatur May 25 @ 3:57am
Could you add the CrownVic to US Border Partol? Looks like they are still using it at least. Here is a link from April 2022:

pacmanx108 May 23 @ 5:55pm
hi, could you add the San Bernardino County Sheriffs for the explorer, tahoe, and mybe the charger?

CptOvius May 17 @ 5:08pm
Hi! I'm having an issue were the mod is no longer appearing in my mod manager. I've tried unsubscribing and subscribing again, but it doesn't work. I was playing like 8 hours ago and it was absolutely fine, but now it just disappeared out of my mod manager even though I'm have not done anything to the game since then. Anybody else experiencing this? Thanks

MishaTX May 17 @ 6:01am
Love your work, VERY impressive! Just a friendly tip: If you can, you should try to compress your textures a bit more. They come in at a whopping 33Mb which, as far as I know, is way above the 20Mb limit the core engine has, which causes a "Default temporary buffer is insufficient while reading" to appear every time the game has to load them in which, in turn, doesn't crash the game or cause the textures not to load, does cause a lot of stutter.

halbtollekreatur May 10 @ 2:17pm
Can you keep the San Rafael police? Maybe it will be part of a mod 🤔

halbtollekreatur Apr 30 @ 4:26pm
Is there a chance you can make a fix to not spawn Crown Vics? In all countries.
< >