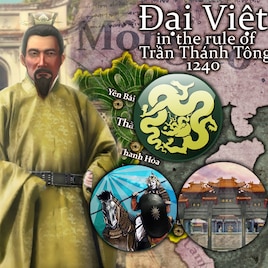 This item has been added to your Subscriptions. Some games will require you to relaunch them before the item will be downloaded.
In 1 collection by Fiona Danger
Lungora's Civs 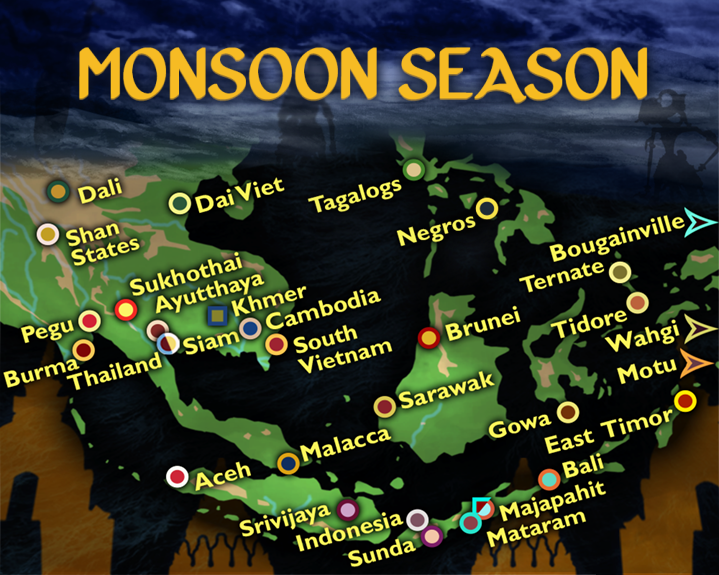 Tran Thanh Tong, and his brother Tran Hung Dao, were two of Vietnam’s greatest historical leaders. They fended off three separated invasions of their country by the Mongol Yuan Dynasty, winning each time. Tran Thanh Tong oversaw the influence of Buddhism in the country, instituted and patronised Confucian-style temples of literature, science, and warfare – and created the first written Viet language out of Chinese characters. Today both are celebrated widely across Vietnam and in Vietnamese communities abroad, I hope to celebrate them via this mod. 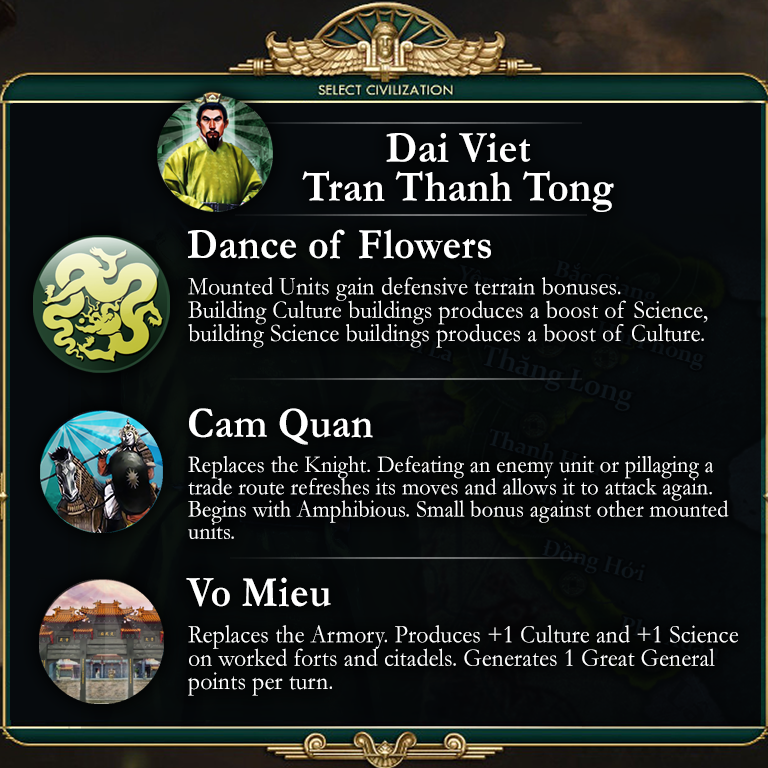 Galgus Aug 11, 2020 @ 12:31pm
The Cam Quan doesn't seem to be refreshing its moves and allowing another attack when killing a unit.

I've been using the mod Reform and Rule, which gives Culture from Shrines in the Piety opener, and the Shrines do not advance technology despite giving Culture.

Mod added buildings with an intrinsic Culture or Science yield seem to give the bonus.

Using a mod adding a Great Ziggaraut wonder, which gives a free Temple in the city it's built and adds +1 Culture to Temples but has no inherent Culture yield in the Wonder building itself, the technology boost does not activate.

The Civ is still a lot of fun to play, though I'd kind of like to see a Tradition Science rush using the free monuments and decisions.

Thanks for making it!

Fiona Danger  [author] Aug 9, 2020 @ 12:18am
@Galgus As far as I am aware any building that is built and provides a base value of culture or science will pop the opposite yield - this includes Cathedrals and the like, any wonders with a base culture or science yield, and should take effect for the buildings effected by Merchantilism if you've already unlocked said policy but only after. I don't believe buildings given for free, like Tradition's Monuments get the bonus due to build triggers, and buildings that provide science or culture on improvements but not a base yield of either won't too. The code was written to be as dynamic and mod-compatible as possible, and if through careful observation you don't get a boost of culture after building say a stock exchange after unlocking Merchantalism that'd be good to know to fix.

Galgus Aug 8, 2020 @ 3:24pm
Do buildings that are given a Culture or Science yield by an outside source, like a Policy benefit activate the UA?