Greenlight > Games > AGS | Dreas's Workshop
Greenlight is being retired. For more information on how to submit games to steam, refer to this blog post.
This item has been removed from the community because it violates Steam Community & Content Guidelines. It is only visible to you. If you believe your item has been removed by mistake, please contact Steam Support.
This item is incompatible with Greenlight. Please see the instructions page for reasons why this item might not work within Greenlight.
Current visibility: Hidden
This item will only be visible to you, admins, and anyone marked as a creator.
Current visibility: Friends-only
This item will only be visible in searches to you, your friends, and admins.
No Photos, Please!
Description Discussions15 Announcements10 Comments351 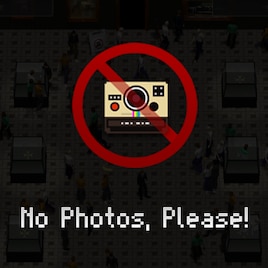 Cameron
Offline
See all 41 collections created by AGS | Dreas and other people (some may be hidden)
In 1 collection by AGS | Dreas
My greenlit games
2 items
Recent Announcements View All (10)
A belated update regarding No Photos, Please! and its progress.
August 10, 2014 - AGS | Dreas

This update has been a long time coming, and in it I will detail what has been happening the past couple of months after NPP's successful greenlight and the reason why it's been taking so long to release. Do note that the game is far from dead; just that progress on it has been slow due to the reasons I'll mention below.

Initially we had two main features that we wanted to work on before officially releasing the game: a) Online Multiplayer support and b) a complete revamp of the User Interface.

So immediately after the game was greenlight, I started working on adding online multiplayer support for the game. I based all networking aspects of the game on Unity's Raknet and surprisingly I didn't encounter too many problems. So about a month a half later, I had online multiplayer support at ~80% complete, meaning I had the gameplay done and working, but still had to write new User Interface elements that are specifically for online play, such as the lobby screen and new menus. I also had to modify the existing menus for online play.

During that time, I also had to switch my professional day-job and joined a game development company writing a new online multiplayer game, and I have been busy ever since working on it. Because of that, I unfortunately had to put No Photos, Please! on the side and only work on it occasionally. As regards this other online multiplayer game I'm working on at the moment, it will be announced soon and quite looking forward to it.

Regarding the UI overhaul, our designer has been working on revamping the Main Menu and the other screens in the game (Pause Menu, Player Select screen, Round Start screen, Round end screen, etc...) and has also started working on the online specific scenes of the game.

The bulk of the work for the new additions is mostly complete. Right now, we're integrating the new UI elements and connecting them with the online aspects of the game.

We're hoping to get this game out the door in the following months. Stay tuned.

Hey all!
I woke up to some fantastic news this morning...No Photos, Please! was greenlit today!

Thank you all for making this happen.

Set in the numerous Heritage Malta museums, No Photos, Please! follows the struggle between a Photographer’s ambition to expand his photograph collection and the museums’ Security Guards’ constant need to do their job in apprehending him.

The game is played from a bird’s eye perspective and provides both players multiple ways to outsmart each other using role-specific abilities while completing their opposing main objectives.

Video previews
In the Media
> Indie Game journalist? Drop me a line for an early access build. <

Before a game session is started, the players choose their roles. A player can select a role using either the keyboard or an Xbox controller. The game also supports two players on the same keyboard. After both players have agreed upon the roles, the game is launched.

If this is the first time the game is run, the players will be greeted with a small introduction text advising them to play through the In-Game Tutorial before playing their first game together.

Once the game is started, the first thing both players need to do is to identify their avatars from the crowd i.e. finding themselves.
The player being the Photographer then needs to take a photo of all the exhibits in the museum by visiting them to win the game, while the player being the Security Guard needs to apprehend him. It is up to both players’ interest to keep a low profile while blend in with the other AI-driven museum visitors.

To better increase the chances of success, both roles incorporate three abilities each. The abilities are designed in a way as to directly oppose each other.

The second ability is Sprint. Sprinting increases the Security Guard’s movement speed for some time. This enables him to easily catch up to the Photographer once identified.
The third and final ability is the Proximity Sensor. The Security Guard can toggle the sensor on or off; each game starts with the sensor turned on. Toggling the Proximity Sensor’s power should be used strategically when pinpointing and/or flanking the Photographer.

All of the abilities are driven by cooldowns, and the cooldown periods vary between each ability.

Work in Progress
1. Online Multiplayer, possibly with Matchmaking
I am currently working on adding online multiplayer support to No Photos, Please!. Note that this involves a partial rewrite of the entire game, so it will take me a bit of time to get it out there.
< >
351 Comments

AGS | Dreas  [author] Jan 20, 2017 @ 10:54am
Hey, I'm back and as promised we have now finally announced the other project we have been working on with Anvil Game Studios for the past two years plus.

Holdfast: Nations At War is an online multiplayer first and third person shooter focusing on a combination of teamwork and individual skill. Take part in historic clashes on land and at sea waged by the most powerful nations during the great Napoleonic Era.

Here's the Greenlight link: http://steamcommunity.com/sharedfiles/filedetails/?id=844303429
And our our official website for the game: http://holdfastgame.com/

While Holdfast: NaW is not the same type of game as No Photos, Please!, we would still greatly appreciate your support if it's a genre you enjoy.

For the past three years, we have been working on a completely different project which will be announced some time around January 2017 (that's what we're hoping for at least). This new project is an online, real-time multiplayer action game hence the relatively long time we needed to work on it.

I can assure you that No Photos, Please! will eventually be released, complete with online multiplayer which actually was already functional in a beta ~two years ago and remastered models+textures with an entire overhaul to the UI, some time in the future after our currently unannounced game is released.

I hope to see all you guys later on.