Store Page
Tabletop Simulator >  Workshop > MJ's Workshop
This item has been removed from the community because it violates Steam Community & Content Guidelines. It is only visible to you. If you believe your item has been removed by mistake, please contact Steam Support.
This item is incompatible with Tabletop Simulator. Please see the instructions page for reasons why this item might not work within Tabletop Simulator.
Current visibility: Hidden
This item will only be visible to you, admins, and anyone marked as a creator.
Current visibility: Friends-only
This item will only be visible in searches to you, your friends, and admins. 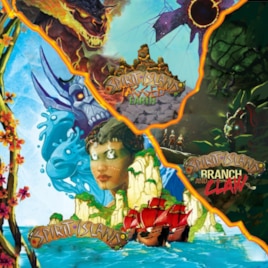 MJ
Offline
See all 141 collections (some may be hidden)

This item has been added to your Subscriptions. Some games will require you to relaunch them before the item will be downloaded.
Description
We strongly recommend you purchase the Handelabra Games created official Steam Game (at https://store.steampowered.com/app/1236720/Spirit_Island/), which is also available on other platforms, such as Android and iOS, to support the Handelabra team. Not only have they allowed us to have this mod available on Tabletop Simulator, but they have also created such a great digital version of Spirit Island, with features such:
-automated Invader Phases
-original dynamic music
-unique Presence for each Spirit
-online multiplayer accessibility (even cross-platform)
-and more

This is an unofficial Spirit Island mod of the Board Game "Spirit Island" by R. Eric Reuss, and contains Branch & Claw, Jagged Earth, and Feather & Flame expansions.

Many features of this Spirit Island mod are scripted, and/or are quality of life features:
-Remaining up-to-date on errata'd changes (e.g. +1 Blight on the Blight Card due to https://querki.net/u/darker/spirit-island-faq/#!one-more-blight-errata )
-Optional "Exploratory" changes to the game, which are too speculative for offical Playtesting, however Eric is still interested in how it affects game play (reports can be shared in the Discord linked below)
-Automatic setup of the Island Boards
-Automatic setup of various Decks
-Automatic Fear Card gaining
-Automatic Difficulty calculation
-The tracking of Elements and Energy cost for the Power Cards played
-A helpful UI containing a Turn Order, any additional Adversary rules and much more
-Support for homebrew Spirits and Adversaries (see the notebook for a template)
-Randomisers for Adversary, Island Board layout, and Spirits
-Coloured Invader pieces to indicate any Adversary rules

This was based on Bone White's mod https://steamcommunity.com/sharedfiles/filedetails/?id=1396185597 also of Spirit Island, but with many improvements.

If you're looking for a place to find others to play Spirit Island, there's a discord just for that! https://discord.gg/G84zRCrJZa

In this game you play as vast Spirits guarding Spirit Island - which you inhabit - there are intruding colonists, who are attempting to harm the land, and your goal is to prevent that in whatever way possible. Spirits can do this through defending the land, directly attacking the invaders, asking the native "Dahan" for help, or even harming the land, to heal at a later date.

A key part of being these spirits, is learning new abilities, through the gaining Power Cards, and in the process Forgetting old Powers. This makes it so, by the end of the game, each player may have developed a brand new set of skills to work with.

The invaders actions are fairly predictable, each turn they perform three steps, harming the land, building new Towns/Cities, and then finally Exploring further into the island, due to this pattern, players are able to develop strategies in advance.

There are adversaries which you can choose from to make the invaders a greater threat - currently there are seven, Brandenburg-Prussia, England, Sweden, France, Habsburg, Russia and Scotland, based on an alternate history set in the 1700/1800s - these add different features to the game, spicing it up for players who want a challenge.
Popular Discussions View All (1)

shaydwyrm Jan 27 @ 2:24pm
When I start a new game the dahan tokens start out hovering a few inches above the map. If I grab and release them they will fall down to the surface so it's not really a big deal, but I'm curious if there's anything I/you can do about this.

Magnnus Jan 22 @ 9:11am
@iakona Neither restarting TTS nor disabling mod caching helped. However, I noticed the Mage Knight mod has the same issue, so this is likely a bug with TTS itself.

@Magnnus try restarting TTS and/or toggling the Mod Caching setting. this issue is on your end though

Magnnus Jan 21 @ 6:05pm
Text in the setup UI, except "Start Game" and "Hide UI", is not showing for me. Checkbox labels are missing, dropdown menus have selectable boxes but no text, and sliders are unlabeled.

NachoArcade Jan 21 @ 3:07pm
I've been trying to figure out how to start the "Second Wave" scenario but my technicaly knowhow isnt adequate. We finished our game and clicked the "Second Wave?" button, but we are unsure how to proceed from here. Does anyone know how to set it up (other than manually that is)

NettleSoup Jan 14 @ 8:39pm
Having things unlocked is messy, and encourages people to mess with them, which can do weird stuff to scripting. It also makes it harder to interact with them should you need to do so, without dragging it all over the place. Stuff that is locked won't go missing or fall into bags.

Holding down alt and shift together to see the back works fine, and is good practice for when the board is in front of you (The player mat would be unusable if it was unlocked). Alt is a magnifier, so you can see stuff at a distance or read text which might be too small otherwise, shift is a modifier for it which allows you to see the opposite side.

Poweronoff Jan 14 @ 8:25pm
@iakona: OK, thanks for the reply, pity but if the engine doesn't provide for it, then so be it. :) I will try your suggestions; I didn't expect that "remove all extension events" will also implement the changed rules that only came with the extension in the first place, but hadn't tested it. :) And you're right, I don't yet know most of the shortcuts, only found out about the quick (u)nlock from the comment of NettleSoup below, in fact. That one gets the job done, maybe I just don't see the drawbacks of having these particular boards unlocked by default.

Mr. Zik Jan 8 @ 11:23am
This is an amazing mod for an amazing game. The scripting automates just about everything that could possibly could be automated. The handling of elements is particularly great and is always something I miss when playing the physical game. Major kudos to the authors.

iakona  [author] Jan 7 @ 7:21pm
@Poweronoff snap won't help for this situation even if you put them on the side of the board, there's not much i can do. as for having things unlocked by default sounds like you're not familiar with the TTS shortcut of alt + shift. eventless playthrough is possible, either check under the variants and remove all expansion events, or turn off advanced mode and uncheck the events box

Poweronoff Jan 7 @ 3:56pm
This is indeed a great mod, very polished and flexible! Creating a game with manually selected boards works very well too, but is there perhaps a way to make them fit together as snugly as when automatically created? Snap is enabled by default but that does not affect this behaviour it seems. Also, having the spirit and scenario boards unlocked by default would enable flipping during selection, so you don't need to already know the backsides or toggle lock for each manually. :).

Also, one optional rule seems to be missing: play without events (the one that adds two beast control cards, removes all blight cards that have either only 2 blight per player or only a one-time effect, etc.). Thanks to the flexible implementation, one can still play that way though, but mabe I just didn't find the options for that yet?
< >