Store Page
Half-Life: Alyx>  Workshop > Out Absentia  Trevor's Workshop
This item has been removed from the community because it violates Steam Community & Content Guidelines. It is only visible to you. If you believe your item has been removed by mistake, please contact Steam Support.
This item is incompatible with Half-Life: Alyx. Please see the instructions page for reasons why this item might not work within Half-Life: Alyx.
Current visibility: Hidden
This item will only be visible to you, admins, and anyone marked as a creator.
Current visibility: Friends-only
This item will only be visible in searches to you, your friends, and admins. 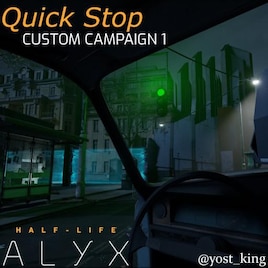 Mean Mr. Mustard
Online
See all 28 collections (some may be hidden)

This item has been added to your Subscriptions. Some games will require you to relaunch them before the item will be downloaded.
Description
2nd place winner in the the inaugural HL:A Modding Hub Discord[discord.com] mapping competition. You can find all the other maps on the workshop right here!

- STORY -
Trying to cut across City 17 in a stolen car, Alyx finds herself trapped before a monolithic Combine security checkpoint. Forced to proceed on foot and find a way to get past the barricade, Russell works behind the scenes to organize new transportation on the other side.

This map was originally made using the pre-release tools and without access to the full assets, Valve's prefabs, examples, and handy time saving features like the Tile Meshes. I've done a quick update to get it working with the full SDK.

Created for map contest #1 in the Alyx Modding Hub community, I took this opportunity to learn Source 2 Hammer's workflow. Thanks to Mean Mr. Mustard for some additional prefabs, feedback and playtesting, and thank you for playing / downloading!

- DESIGN -
After playing and loving the campaign of Half-Life: Alyx, I did wish there were more extended combat encounters with the Combine, so the contest theme of the Combine Presence fit well with what I wanted to create. At the same time, I didn't just want to make a bunch of combat rooms. My goal for the map was to get as close as I could to the feeling of a 'lost chapter' of Alyx and use similar pacing, narrative, and design style to match Valve's approach.

To this end I included a real effort on lighting, fog settings, a custom 3D skybox, steam audio implementation, music and sound effects, scripted scenes, Russel/Alyx/Combine VO storytelling, secreted away ammo and resin for crafting, and health stations/grubs. There are also quicksaves placed throughout so you shouldn't lose progress or get stuck.

Through iterating on the map I have also found ways to make the Combine encounters more reactive to the player's approach to the area and remain challenging even on multiple play-throughs.

If you enjoy this style of map, please consider leaving a rating. I'd love to make more!

Velique Oct 18 @ 2:05pm
Thoroughly enjoyed this. So much detail, great open level design. Nice to play more out door sections, and as others have said the final section was epic. Felt especially moody at night. The game crashed when I got to the end trigger though? Still, 100% recommended.

sockswithsandals Sep 25 @ 10:55am
All good, except long range combat in the end

Jarilo Sep 7 @ 9:38pm
Just finished it, this was good. The main campaign definitely could have used more battles like the gas station Valve!

Dirt Jul 12 @ 2:09pm
Fighting Combines over a long distance sucks. I disliked the end where you had to remove the power core. First I tried to shoot the guards with my pistol until I ran out of bullets (hard difficulty) and had to restart from save about 10 times. That sucked.

Deniz Erdem Jun 8 @ 9:41am
This was a very cool map. Great combat. Locations might be a bit too big for a vr game though. Enviroments would feel much richer if it were condensed a bit.

Dr. Walrus 2.0 Jun 6 @ 2:22pm
Just played through your map Quickstop. Thoroughly enjoyed it, although that final fight was pretty tough. Definitely deserving of a Top 3 finish in the contest so I'm glad it got second place. https://www.youtube.com/watch?v=hIy9AxCmIck&feature=youtu.be

WhatsHisName Jun 4 @ 9:05pm
Very cool map, definitely one of the best I've played. The underground sections had such a cool atmosphere, and the gas station fight was amazing! ...well, if I didn't screw myself over by alerting the combine while standing in the apartment doorway. Overall, great level design, enemy placement, lighting, item placement, atmosphere, oh it was all so good. Highly recommend.
< >