Greenlight > Games > Maurycy's Workshop
Greenlight is being retired. For more information on how to submit games to steam, refer to this blog post.
This item has been removed from the community because it violates Steam Community & Content Guidelines. It is only visible to you. If you believe your item has been removed by mistake, please contact Steam Support.
This item is incompatible with Greenlight. Please see the instructions page for reasons why this item might not work within Greenlight.
Current visibility: Hidden
This item will only be visible to you, admins, and anyone marked as a creator.
Current visibility: Friends-only
This item will only be visible in searches to you, your friends, and admins.
Monstro: Battle Tactics
Description Discussions0 Announcements5 Comments62 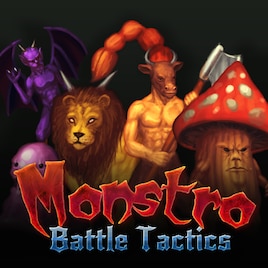 Maurycy
Offline
See all 8 collections (some may be hidden)

I'd like to take a short moment to tell you that Monstro shall be released on Steam on December 3rd this year! The steam version will feature updated interface, new levels, better controls and overall polish of the whole game.

It's been some time since the last update so I figured out it's high time to post an update. Monstro is now mostly fully integrated with Steam and is mostly ready for release. There is still a number of things which need to be done:
- A new small campaign
- Pushing saves to steam cloud
- Implementing new HUD design
- Bugfixes

And before Monstro releases we want to prepare a greenligh page for another project we're working on.

Read More
Description
Release date: December 3, 2015
What is this about?
Monstro is a logic game which plays like games from the tactical genre such as Fire Emblem or Final Fantasy Tactics.

Control your human or monster army against your opponent in a logical fashion - no longer a sudden miss will break your strategy, no longer a spontaneous critical hit will reap death in your party; In Monstro, there is no Random Number God to toss lives of your men around.

Set in the fictional and unimportant land of Ludus, where sudden appearance of angry Sky Gods forces the poor inhabitants to battle each other, the game concentrates on what is important. It embraces the retro traits of olden games - minimization of unnecessary plot devices and maximization of gameplay. Not to mention the crisp pixelart that will make you remember the good times.

What about Mac/Linux/Mobile?
We hope to make Mac and Linux versions available in the near future, probably before the game is accepted on Steam. As for Mobile, the development is planned and depending on community reception, mobile version will or will not be made.
< >
62 Comments

Caravel Games May 8, 2014 @ 9:34am
No one likes pure tactics puzzle games anymore? This looks great!

Seth Xeider Feb 22, 2014 @ 1:11pm
Unfortuntely, they don't understand why this doesn't work. The whole point of games like Fire Emblem is that you need to have a strategy that can always change, that can be flexible. The "chaos" as this calls it, the chaos of war, is what makes these strategy games good. Sorry, Retrocade. You missed.

Monstro: Battle Tactics has been Greenlit and is now listed in the Steam store. For the latest information, purchase options, and discussions for Monstro: Battle Tactics, please see it on the Steam Store or in the Steam Community.
Visit Store Page
For more details Visit Community Hub
For latest discussions
If you really, really want to, you can continue to the Greenlight page. Information on this page may be out of date, since all the action has moved to the areas noted above.