Store Page
Tabletop Simulator>  Workshop > mnmkami's Workshop
This item has been removed from the community because it violates Steam Community & Content Guidelines. It is only visible to you. If you believe your item has been removed by mistake, please contact Steam Support.
This item is incompatible with Tabletop Simulator. Please see the instructions page for reasons why this item might not work within Tabletop Simulator.
Current visibility: Hidden
This item will only be visible to you, admins, and anyone marked as a creator.
Current visibility: Friends-only
This item will only be visible in searches to you, your friends, and admins. 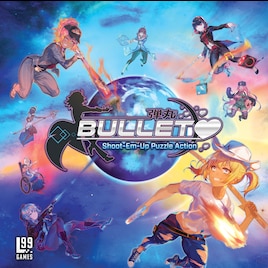 mnmkami
Offline
See all 40 collections (some may be hidden)

This item has been added to your Subscriptions. Some games will require you to relaunch them before the item will be downloaded.
Description
NOW WITH Bullet🍊 & Bullet⭐! FIND OUT MORE BY CLICKING HERE![www.level99games.com]

Bullet is a fast-paced SHMUP-inspired puzzle-battle game for your tabletop! Dodge incoming bullets while creating patterns and sending more bullets to your opponent.

Bullet♥︎ is a Shoot-em-up (SHMUP) puzzle action board game, inspired by series like
Tohou Project, Ikaruga, Deathsmiles, The Hurricane of the Varstray, Ether Vapor, and Acceleration of Suguri, to name a few.

Players take on the role of heroines in a far-flung future earth, and use their incredible powers to defend the earth from evil!... but mostly from one another. This is the official module from Level 99 Games.

Note that the game is still in early access and the components are not final. Content is subject to change.

Game Notes:
-Right click a heroine board and change its state to play as different characters. You can do the same thing with the bosses!
-Heroine and Boss patterns are found in bags on the sides of the table (Heroines are found near the Markers and Bosses are found near the Boss Board).
< >
35 Comments

Kalisto Nov 24, 2021 @ 2:22am
Thans for the mod, i have been trying to find a copy of this game for a month now. Great solo play, great game. One of the best real time games ever with space alert permission.

twinburner Aug 7, 2021 @ 7:31pm
so the mod seems to be broken in a couple ways? me and friends of mine are getting 'unsupported format' errors trying to use some of the new stuff like the sora and trying to load the other new bosses than forest witch.

IceCreamScoop May 4, 2021 @ 5:25pm
so i was looking through and it seems the boss decks are mixed up? like mecha mary doesn't have any of her cards in her deck.

Nisa Mar 11, 2021 @ 3:12pm
Just tried it out with a friend for the first time earlier, we had a great time with it.
Great concept and design, danmaku is all about powah da ze!

Jason Jul 31, 2020 @ 4:46am
Hi I noticed the number of bullets required to break a boss' shield is written above the shield slot rather than the bottom like the rulebook said. Is this intentional?