Store Page
Cities: Skylines>  Workshop > Astro's Workshop
This item has been removed from the community because it violates Steam Community & Content Guidelines. It is only visible to you. If you believe your item has been removed by mistake, please contact Steam Support.
This item is incompatible with Cities: Skylines. Please see the instructions page for reasons why this item might not work within Cities: Skylines.
Current visibility: Hidden
This item will only be visible to you, admins, and anyone marked as a creator.
Current visibility: Friends-only
This item will only be visible in searches to you, your friends, and admins. 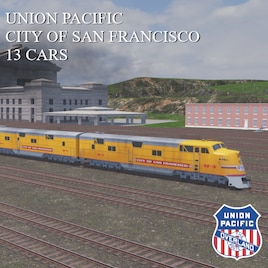 This item has been added to your Subscriptions. Some games will require you to relaunch them before the item will be downloaded.
In 1 collection by Astro
Astro's Train collection

96 items
Description
Union Pacific
The Legendary Union Pacific Railroad is one of the oldest railroads currently operating in the United States. Founded initially in 1862 for the construction of the first transcontinental railroad. After a series of mergers followed by mega mergers Union Pacific and BNSF are the only Class 1 railroads to service the Rocky Mountains and the West Coast

Comes with automatic engine reverse feature: spawns the engine in front of the direction the train goes. comes with custom sound effects for movement and horn.
imported with a prototype mod to reduce the texture compression in game so the file size is large

How to Use
Train functions as a regular passenger train but due to its length some additional consideration might be needed when setting up passenger stations for it. Consult the "How to use very long passenger trains, building station complex" by REV0