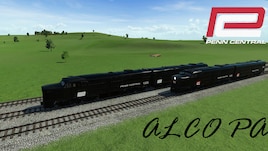 Thad
Offline
See all 8 collections (some may be hidden)

Penn Central inherited its Alco PA's from its three predecessors: Pennsylvania Railroad, New York Central Railroad and the New York, New Haven & Hartford Railroad (New Haven). These along with the PC's other passenger equipment was used for only a short time before the formation of Amtrak in 1971. In addition to Penn Central, Amtrak acquired the passenger equipment of nineteen other railroads, and for a time operated a mismatch of equipment from all of them during a time known as the "rainbow era".

This mod includes asset versions of each locomotive, as well as multiple units.
< >
9 Comments

themeatballhero Mar 8 @ 5:22pm
hey if you're on discord, the american modding server would love to help you! I can even throw an updated coupler version your way ;)

Thad  [author] Nov 29, 2020 @ 9:25am
@MADxViper13 I do intend to release as much as possible on TpF2 including some new content. Just in the process of learning how it all works in relation to TpF1, since there's a number of differences.

They'll be in TpF2 sooner than you think :)

Thad  [author] May 9, 2020 @ 6:28pm
I haven't gotten around to purchasing TpF2, and with quarantine going on I decided to do this to keep myself busy seeing as I'd modded this game before. Rest assured, as soon as I get TpF2 I will be porting over all my TpF1 mods.