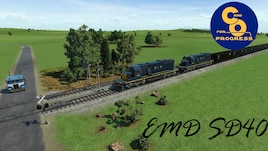 Thad
Offline
See all 7 collections (some may be hidden)

The EMD SD40 was the less-popular earlier iteration of the SD40-2, produced from 1966 to 1972. They were some of the last locomotives purchased by the C&O before becoming part of Chessie System, eventually acquiring a total of 63. For about a decade prior to the merger, Chesapeake & Ohio had already gained financial control of the Baltimore & Ohio Railway. During this time, the two railways painted their locomotives in a matching paint scheme that was significantly simplified compared to their earlier diesel schemes. These locomotives would have gone on to Chessie System and even CSX before being retired. A surviving example was repainted into C&O colours and delivered to the Chesapeake & Ohio Historical Society in early 2019.

This mod includes asset versions of each locomotive, as well as multiple unit versions for double-headers.
< >
2 Comments