Store Page
Stellaris >  Workshop > AryxCami's Workshop
This item has been removed from the community because it violates Steam Community & Content Guidelines. It is only visible to you. If you believe your item has been removed by mistake, please contact Steam Support.
This item is incompatible with Stellaris. Please see the instructions page for reasons why this item might not work within Stellaris.
Current visibility: Hidden
This item will only be visible to you, admins, and anyone marked as a creator.
Current visibility: Friends-only
This item will only be visible in searches to you, your friends, and admins. 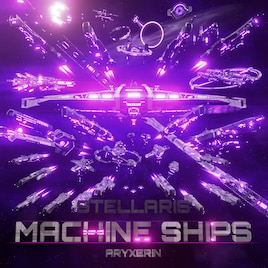 This item has been added to your Subscriptions. Some games will require you to relaunch them before the item will be downloaded.
In 1 collection by AryxCami
Erin's MP Collection

20 items
Description
The Automated Dreadnought guardian is a beautiful ship. Which makes it a shame that it's one of a kind and that there aren't many other ships in its style.
Until now!

Behold machine ships, a fully sectioned shipset!
Machine Ships adds a new shipset in the stellaris game style. Rather than pull from some movie series or game, these ships are designed with the stellaris lore and style in mind. The shipset is accessable from the empire creation ship menu screen. It contains high quality models and ships of all kinds, including the following:


Unlike most other shipset mods on the workshop, Machine Ships is FULLY SECTIONED meaning that all of the ship classes are made of different section and module variants. A large update that overhauls all of the models is on its way.
Don't forget to upvote/favourite! It's the easiest way to support me as a mod creator as it provides the motivation to create. Less than 3% of the mod's subs vote for it positively which does get depressing.

Does the mod support NSC?
Yes, I am an NSC2 developer.

Does the mod work with Downscaled Ships, Real Space System Scale or Aesthetic Cinematic Gameplay?
Yes, there is a patch on my workshop page.

Does the mod work with Realistic ships?
Yep, compatibility is inbuilt.

Why is the dyson sphere so garbage?
You tell me.

Habitats appear black
I know - I have not been able to replicate it on my end at all and thus cannot fix it.

UNAUTHORISED UPLOADS STRICTLY PROHIBITED, YOU WILL BE MET WITH A DMCA.


IF THE MOD OR SHIPSET DO NOT SHOW UP:
Check your error.log to make sure the mod files have been found. If it reads anything like "Could not find files for mod" then some numbers, that's the paradox launcher at work. According to the Paradoxplaza, the solution is deleting the mods_registry.json file and all the ugc numbered.mod files.


AS FOUND BY NIHIL!
"I found you, you damnable saboteur!
launcher-v2.sqlite
This one singular piece of code is the only reason as to why this mod didn't want to work for me.
Removing it did the trick, the mod works perfectly once more.
If the mod shows up in the launcher, yet doesn't do so in the actual game, then look up that bit of code in your stellaris folder, and remove it."


If you want to throw money at me, I have a funky patreon here: https://www.patreon.com/Aryx3DArt

YES IT WORKS WITH 3.4. IF YOU ASK I WILL RIP YOUR NUTS OFF WITH A MACHETE AND BLUDGEON YOU WITH THEM.
Popular Discussions View All (3)

Spirit Aug 5 @ 12:50pm
one of the best shipsets that get abandoned it seems , it misses the latest custom megastructures like the capital torus and the slingshot megastructure

savadrin Jul 28 @ 2:42am
also you threaten DMCA for re-uploads, but won't update your own mod to the current game version. kinda wack there.

savadrin Jul 28 @ 2:41am
why are some shipsets achievement compatible but some aren't?

also the mod works for 3.4, it just flags the little triangle saying it's for a previous version of the game.

bascott83 Jul 20 @ 8:15am
wow, Tilarium. In every comment tread I see your username, your a asshole on a ego trip and a Condescending Attitude.
What is your Problem?
Lighten up/be nice or go get some help.
No reason to be that way.

6thStrikeUnit Jul 15 @ 4:57pm
nice to meet you. The creator of [JP_EN]Mechanical Leviathan and [JP_EN]Transformed Battleship .
I'm using the "Machine Shipset" model in a mod, but since it violated the stellaris mod rules, could you please give me permission for this?