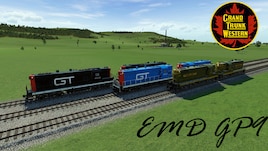 Thad
Offline
See all 5 collections (some may be hidden)

Grand Trunk Western began in 1900 as a subsidiary of the Grand Trunk Railway of Canada. Almost all of the GTR's existing subsidiaries in Michigan, Indiana and Illinois were consolidated under this one name. Even after the Grand Trunk Railway went bankrupt and became part of Canadian National, Grand Trunk Western remained a subsidiary and its name unchanged. However, the corporate image of GTW would be made to match that of Canadian National for the rest of its lifetime. All of its future paint schemes were almost identical to its parent company.

Grand Trunk Western came to own a total of 51 GP9 locomotives. Unlike its parent company, these were all built at EMD's plant in La Grange, Illinois. As such, GTW received their GP9's in 1954, a year prior to Canadian National. While built as road switchers, the GP9 found many uses on Grand Trunk Western, from freight to passenger service. While not represented on this model, passenger-hauling units were built with steam generators which resembled torpedo tubes on the roof of each locomotive. They would commonly pull short-haul named passenger trains such as The International between Toronto and Chicago. Like most high hood GP9's, Grand Trunk Western opted to run them long hood forward most of the time, and this is represented properly in-game.

This mod includes asset versions of each locomotive, as well as multiple unit versions for double-headers.