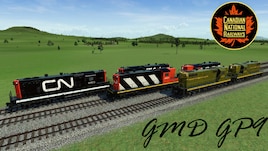 Thad
Offline
See all 6 collections (some may be hidden)

After seeing success with the earlier GP7 model, Canadian National would order a total of 349 GP9's. Unlike most American railroads, Canadian National's GP9's were built by EMD's Canadian subsidiary General Motors Diesel (GMD) whose plant was located in London, Ontario. While built as road switchers, the GP9 found many uses on Canadian National, from freight to passenger service. While not represented on this model, passenger-hauling units were built with steam generators which resembled torpedo tubes on the roof of each locomotive. They would commonly pull short-haul named passenger trains such as The International between Toronto and Chicago. Like most high hood GP9's, Canadian National opted to run them long hood forward most of the time, and this is represented properly in-game. While construction on the GP9 started at EMD in 1954, it began at GMD a year later in 1955.

In 1960, Canadian National introduced a pair of paint schemes that would be precursors to the one they use now. Both the "Tiger Stripe" and "Wet Noodle" schemes were common during the 1960's - 1980's. During this time most GP9's were relegated to freight service as newer locomotives were produced. Starting in 1980, Canadian National began a massive rebuild program of their GP9's. The rebuilt locomotives would have short hoods and run short hood forward and be used primarily for yard switching.

This mod includes asset versions of each locomotive, as well as multiple unit versions for double-headers.
< >
7 Comments

Thad  [author] May 9, 2020 @ 12:32pm
I'm afraid I can't help with that as I can't find the problem on my end. Hopefully it may just be you, and not a problem with the mod itself as I can't see why it would cause a crash to desktop with no message.