Store Page
Hearts of Iron IV>  Workshop > Rex Umbrah's Workshop
This item has been removed from the community because it violates Steam Community & Content Guidelines. It is only visible to you. If you believe your item has been removed by mistake, please contact Steam Support.
This item is incompatible with Hearts of Iron IV. Please see the instructions page for reasons why this item might not work within Hearts of Iron IV.
Current visibility: Hidden
This item will only be visible to you, admins, and anyone marked as a creator.
Current visibility: Friends-only
This item will only be visible in searches to you, your friends, and admins. 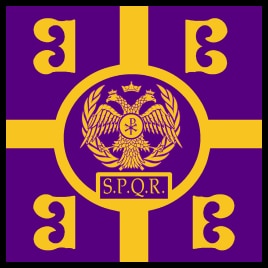 Rex Umbrah
Offline
See all 15 collections (some may be hidden)

This item has been added to your Subscriptions. Some games will require you to relaunch them before the item will be downloaded.
Description
Basileía ton Romaíon for KR Kaiserreich. Byzantium Alpha 0.4

Mod brings the ERE Eastern Roman Empire (Byzantium) or Byzantine Empire into the world of Kaiserreich. Keiserreich Mod is required to play.

What if the Sejuk Turks never invaded Anatolia? The Roman Empire starts with Greece and Anatolia and Georgia and Armenia are Exarchate Puppet governments.

"On 26 August 1071 near Manzikert, the Byzantine army decisively defeated the Sejuk Turks and captured Sultan Alp Arslan. Turks were never again able to threaten the Empire.
New struggles arrived in the following centuries, the Latins discovered naval trade routes to Asia diminishing control of the silk road trade entering Europe. Despite this set back the Empire continued to prosper as one of the strongest Economic and Military powers in the world.

The recent World War saw us on the loosing side against Germany, Austrian and Persia. The German alliance instigated large scale rebellions in the Balkans. The only thing that stopped a complete collapse of our Empire was our decisive victories against Persia in Armenia. The later peace treaty had us give up territory to Slavic and Bulgar nationalists and a third of our Armenian frontier.

The Empire is strong and proud and poised to retake all it has lost if you are ready to lead it.

To the west the the fledgling Slavic and Bulgar nations are fighting amongst themselves as Bulgaria attempts to create a Empire within our rightful domain.
To the east Persia is expanding and is becoming a potential threat and will need to be managed carefully.
To the South Egypt is posturing against our long time friend and ally of Ethiopia.

The regions that were more prosperous during the classical and early medieval periods have all had their economies buffed. Persia and Egypt and Bulgaria are all much stronger.

You start well positioned to make a claim at your former territories.

If you enjoy please favorite and thumb up.
Join our discord at https://discord.gg/dC44Xrqa

Paragonwolf05 Sep 9 @ 1:38am
Hey just asking but is a version of this mod for Kaiserredux planned? Thanks

Rule Britannia Aug 31 @ 5:25pm
hey mate, this is a fantastic mod you've got here. im sure you know this but kaiserreich just got updated (at a very bad time cause i was just about to conquer egypt but rip) so you'll need to update this some point. looking forward to seeing the next update

Horus Aug 6 @ 10:56am
will you be adding similar ones for the other balkan countries as well as persia/egypt? would be great to add it as a goal to a playthrough

Rex Umbrah  [author] Aug 6 @ 8:31am
Added new two step decisions for coring Bulgaria. First Decision takes 240 days to increase compliance to 75 while increasing resistance. Second Decision will pop up once compliance is over 70 and allows you to core the provinces. This is save game compatible.