Store Page
Total War: WARHAMMER II>  Workshop > Xoudad's Workshop
This item has been removed from the community because it violates Steam Community & Content Guidelines. It is only visible to you. If you believe your item has been removed by mistake, please contact Steam Support.
This item is incompatible with Total War: WARHAMMER II. Please see the instructions page for reasons why this item might not work within Total War: WARHAMMER II.
Current visibility: Hidden
This item will only be visible to you, admins, and anyone marked as a creator.
Current visibility: Friends-only
This item will only be visible in searches to you, your friends, and admins. 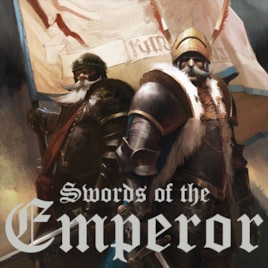 shawmuscle
Offline
See all 669 collections (some may be hidden)

This item has been added to your Subscriptions. Some games will require you to relaunch them before the item will be downloaded.
Description
"There is much wrong in the way that the Empire runs itself, Bloch. Many who rule do not deserve to. Many who are ruled could make a better fist of it. You’re a fighting man. You’ve seen armies commanded by fools and good men led into ruin by them. But there’s opportunity in battle. Mettle will always show itself. There are men in the Empire who know how to reward talent and how to ignore low birth. The Emperor, Sigmar keeps him, is one. It is to him I owe my station, not to my breeding. And so it is with me. I need good men around me. I’d like you to be one of them."
—Ludwig Schwarzhelm, Emperor's Sword of Justice

This mod is a co-creation from Willemsen, Shawmuscle and Xoudad.
This mod is introducing 3 known characters of the Empire :

Originally posted by Loremaster:
Ludwig Schwarzhelm, known as the Emperor's Champion or the Emperor's Sword of Justice is the personal bodyguard of Karl Franz and bearer of his personal battle standard. Ludwig is a towering figure of a man, renowned throughout the Empire for his mighty physique, stern expression and deadly martial skills. The Emperor's champion is said to have never smiled in his life and his reputation as an uncompromising, incorruptible warrior is one Ludwig has consciously cultivated over the years.

Ludwig Schwarzhelm is presented as a rough character, wearing the ancient armour of the Emperor's Champions, the Emperor battle standard and the Sword of Justice :

Originally posted by Loremaster:
Kurt Helborg is the 8th and current Grand Master of the Reiksguard Knights, Reiksmarshal of the Empire's military forces and one of Emperor Karl Franz's most trusted military commanders.Tall and strong, Kurt Helborg is the very image of a heroic warrior, his armour polished to a mirror sheen and his sword arm as strong as his courage is unbending. As the Grand Master of the Reiksguard, Helborg commands the loyalty of one of the Empire's mightiest military corps. As the Reiksmarshal, Kurt Helborg is also commander of all the Empire's armed forces, second only to the Emperor himself.

Kurt Helborg is presented as the mightiest hero and commander of the Empire, equipped with the Solland runefang and the Laurels of Victory :

Originally posted by Loremaster:
A fourth figure cleared his throat then – Hans Zintler, the Reikscaptain. In Helborg’s absence he was the highest ranking military officer, and carried himself suitably formally, with a brass-buttoned jerkin and short riding cloak. His black moustache was neatly trimmed across a broad-jawed face.

Hans Zintler is not a major figure of the Empire but a major one in the Reiksguard as the Reikscaptain :

THIS MOD HAS CUSTOM FAN MADE ASSETS that took weeks of efforts to make and tweak, so please don’t reuse those assets without permission :)
Needs a fresh campaign.

This mod is part of a colelction of mods meant to make each Empire province more unique :

Credits & thanks :
If you want to share your ideas, lore discussions or just see what we are up to, join us on Discord[discord.gg].
Popular Discussions View All (1)

sel Nov 16 @ 11:21am
Alright, thanks. I must have missed that some where in the description?

sel Nov 16 @ 11:10am
Im just going to assume that this mod doesnt work if added mid campaign. Ive built the reiks castle and still cant recruit Helborg despite getting the notification telling me he is unlocked.

Xoudad  [author] Nov 13 @ 9:55am
For those not having the horoes spawning, you have a script break because of an other mod.
@Malivamar : The compatibility is not on my end, you need to either make a submod that does what this mod do, or ask the mod author to add my characters
@Windows9527 : There is a trick where you can swap a random lord at start to get Helborg, but that's not intended. THough he should still be in your lord pool and locked. if not you're having a script break from an other mod

Windows9527 Nov 13 @ 7:57am
"With a similar mechanic that Volkmar has, Helborg is available in your Lord pool at start but needs the Castle Reiksguard to be recruited"

I was able to recruit Kurt Helborg round one, is this intended? Now I love this though, just making sure if I didn't break the Reik's guard castle stuff.

Malivamar Nov 7 @ 3:25pm
Great mod! Could you by any chance make a version compatible with total unit resize? https://steamcommunity.com/sharedfiles/filedetails/?id=1946815704
Its not that the mods cant be ran together, what I mean is just making a version where the new units are the size of regular human infantry so that they dont stick out like the giant lords and heroes of the base game.

Connovar Nov 5 @ 7:20am
Ludwig pops after mission completion. You said your mods haven't changed, are you using KMM?

MaximoCozzetti Nov 4 @ 6:29pm
I really liked the mod. I Just had this problem. Ludwig should have appeared after the first quest (I even get the notification), but it doesnt appear anywhere. In my Last campaing I get him no problem, playing with the same mods. Do I need to have any buildings? I don't seem to remember

B.C. "Luden" Ludenberg Oct 29 @ 12:07pm
Hello! Great mod, truly, but I have a question: Is there a version or can I do something to get only those heros, but no Imperial Foot (Sword and Shield) or anything else from Grand Order of Reiksguard? I already have other mods that add a bit better foot Reiksguard, so there's no use of this mod Reiksguard for me. Of course if there's nothing to then that fine!
< >