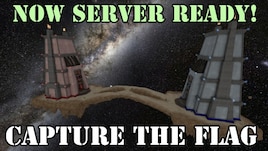 This item has been added to your Subscriptions. Some games will require you to relaunch them before the item will be downloaded.
In 1 collection by Spherix
capturetheflag

Capture the Flag brought to CS:GO!
I've used the famous map Facing Worlds to promote a new gameplay mode for CS:GO, the choice of the map is obvious: it's the most legendary map for Capture the Flag.
This is mainly used to show people that CTF is quite possible in CS:GO and I'll help anyone that wants to make other maps with this game mode. Please do not think that I expect this particular map to fit playing style of CS:GO in any serious way; new maps will have to be made with CTF in mind whilst targeting CS:GO to ensure fitting gameplay.

Notes:
- The game mode uses a custom CFG that comes with the map where variables such as sv_gravity and mp_maxrounds are set. Console/Server commands should be able to overwrite them if they are not to your liking.
- Bots are incredibly stupid and I did not put effort into detailing the map on purpose.
- Bots cannot pick up a flag, only return them.
- I will release the CTF mode as prefab as soon as possible so other mapmakers can implement CTF in their maps easily. The respawning weapons and health kits are already available as prefab on Gamebanana.com.[csgo.gamebanana.com]

Bugs:
- If a player dies by killing itself whilst holding the flag, the game will play both 'flag dropped' and 'flag taken' sounds at once when it's picked up by a member of the dead flagcarrier.
- If mp_halftime is set to 1, the map won't change after the set mp_maxrounds limit. Setting halftime to 0 fixes that, but teamscore is not kept properly in the TAB scoreboard. It is kept correctly on the small scoreboard at the top of your screen however.

Credits:
- Flag models by TopHATTWaffle, script losely based on the ctf_chicken map.
- Level design & sounds originated from the Unreal Tournament series, copyright lies with them, not me.

- Rewrote gameplay to Vscript instead of Hammer entities, it now works properly on dedicated servers.
- Added automated return after flag has been not picked up after dropping it for x seconds.
- Changed respawnwave time from 5 to 8 seconds.
- Players now spawn with armor instead of without.
- All damage is reduced by 10% on this map to give players a better chance to survive.

To run the map with custom settings do any of the following:
- Either run the map via the workshop menu
- Set game_type to 3 in console, or:
- Run the map from the console using "map ctf_facingworlds custom"

To keep up to date with any development for the gamemode or if you have any questions, please join the CSGOCTF group.
Popular Discussions View All (1)

Jonesy Jan 25, 2017 @ 8:52am
The flag is a big error cube that hinders my sight. Too bad, I loved playing this map on Unreal Tournament. Can anyone fix that big error cube???