Store Page
Conan Exiles>  Workshop > TerrIncognito's Workshop
This item has been removed from the community because it violates Steam Community & Content Guidelines. It is only visible to you. If you believe your item has been removed by mistake, please contact Steam Support.
This item is incompatible with Conan Exiles. Please see the instructions page for reasons why this item might not work within Conan Exiles.
Current visibility: Hidden
This item will only be visible to you, admins, and anyone marked as a creator.
Current visibility: Friends-only
This item will only be visible in searches to you, your friends, and admins. 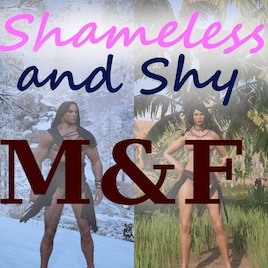 TerrIncognito
Offline
See all 130 collections (some may be hidden)

This item has been added to your Subscriptions. Some games will require you to relaunch them before the item will be downloaded.
Description
Build 0.3.5 Compatibility patch 31 Oct 2020

There are many races in Exiled Lands, each race has their onw view about the world and about their own bodies. Is it a God's bless or curse, feature of kings or slaves, source of true pleasure or reminder about ancestor's sins?
Unfortunately, all outfits in the game are made with just one perception in mind, "dominating" IRL, you know which one.

This mod aims to bring back the diversity of lifestyles.

Some exiles around the lands may be more shameless or shy.
Some exiles just go naked!

You can unlock special feats. "Shameless" and "Shy".
Some NPC's wear skimpy clothing or nothing, but for you, exile, they will make shy versions only.
But you can carve these clothes by yourself using "Shameless" feats.
Except for darfari - they make their shameless belts and necklaces.
You can turn them into shy versions by adding pieces of leather with "Shy" feat.

As a result, players can craft shameless or shy versions of all modded outfits!

No mesh replaced. All changes done with data tabls.
This mod does not change Character Assemble Library anymore.

Fixes:
Fix for Siptah update
Fixed gap in Lemurian Gown
Random NPC's nudity is back (now I will ckeck it)

Added Lemurian Queen Shameless outfit
Lemurian Gown is sepatated to top and bottom, each in Shameless and Shy version
Craftable similar to vanilla - the way that was intended for every shameless armor
Added craftable Bra M&F, Loincloth with and without panties
Added craftable Apron Bottom

dango Oct 21 @ 2:45am
I know if allow player unlock skill free. Player can craft powerful shameless armor when the game begin,it is not good for game balance.
But this will return the first question. Why this mod make player can craft shameless armor?
I think all armor making should be in the topfreedom mod. Or craft a new mod to do it.

dango Oct 21 @ 2:37am
Why this mod make player can craft a lot of shameless armor? The topfreedom mod already do it. Now there are too many clothes in the list.
And this mod use skill to control the NPC's clothes,that is fine. But why this mod skill need skill point and prerequisite skills? I think this mod skill should unlock by free.

Foehammer Oct 9 @ 5:04pm
Loving this mod, I did find a possible omission: there are no High grade Flawless versions of the shameless heavy pauldron or the heavy tasset would love to dress my hot fighter thrall in those. PS any way to apply the change to the delving bench armors that use the vanilla models?
< >