Greenlight > Concepts > Holotech Studios's Workshop
Greenlight is being retired. For more information on how to submit games to steam, refer to this blog post.
This item has been removed from the community because it violates Steam Community & Content Guidelines. It is only visible to you. If you believe your item has been removed by mistake, please contact Steam Support.
This item is incompatible with Greenlight. Please see the instructions page for reasons why this item might not work within Greenlight.
Current visibility: Hidden
This item will only be visible to you, admins, and anyone marked as a creator.
Current visibility: Friends-only
This item will only be visible in searches to you, your friends, and admins.
FaceRig
Description Discussions17 Announcements33 Comments399 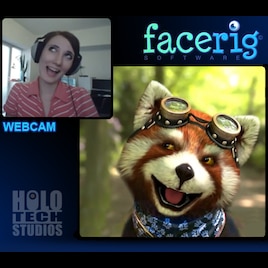 The FaceRig Pre-orders with Beta access are now live.
For now only FacErig Classic Beta is available. The Pro Upgrade DLC should be available soon too.

http://store.steampowered.com/app/274920
Be advised, the program is in development and not without issues (but we still think it is pretty fun) . :)

The FaceRig Beta Keys have been sent out today to the Indiegogo backers. The process (as expected) did not go totally smooth, but we will take action and correct any miss-haps over the next 24 to 48 hours (it will just take a bit of time because we have to check and double check anything related to program keys). We have described the most frequent miss-haps in posts on our FaceBook and G+ Pages. Public beta access for those who have missed the IGG campaign will open most likely on Friday.

The program itself does seem to work for the majority of the users which is good, but some also experience glitches and crashes (after all it is an early Beta so this was to be expected). We are collecting data and will investigate this as fast as we can and we will ultimately correct all of the bugs (that's part why we made this public after all), but it may take a while (we are a very small indie dev team and we need occasional sleep to keep functioning :) ). We do apologize to those who cannot use the early Beta right away.

We have planned the next weeks to be 100% bug response mode (no new features are being included in the next weeks, we are just fixing the bugs that you will be reporting to us). The best way to give us bug and crash data is via the Steam infrastructure (it may get lost on Facebook).


The Website
The Facerig website ( facerig.com ) went down shortly after we have sent out the keys. Fortunately the forums here on Steam work just as well for providing support so we are not without back-up. TeamWEB our web-dev contractors are on the job. They have told us that this is not a server overload issue, but rather an issue with the hosting provider 1and1.com .

Temporary third party software
The native "Save a replay as a rendered movie on disk" functionality is disabled right now (more because of licensing reasons related to codecs than anything else). It will be most likely sorted out in the following weeks.
That means that in the current version, saving a rendered movie out of FaceRig will be done with external gaming video capture software. There are quite a few of those out there. A Google search on "free streaming software" will give you more options than you will ever need (both totally free and commercial). This is temporary of course.

The documentation for the custom avatars import process may lag a bit behind the launch on the 29'th as we may prioritize the documentation for importing custom props over full custom avatars as that is less complex (as in less scary) , and it should ease people into content creation. The import process is where we expect to have the most bugs and issues at first. We do plan to offer quite a few of the starting avatars in "ready to import" formats too, so you can tinker with them (and their textures) as a means to learn about custom avatar creation.

Avatars
We have spent a lot of time thinking about it and we have placed ALL the avatars that we have designed and built so far in the initial free/included pack (not just ten). The licensed avatars from the video will come a bit later, in their own free DLC's, (it is best practice not to bundle them with the program, because of licensing legal matters).

Read More
Description
FaceRig is a program enabling anyone with a webcam to instantly embody any character they want. The output can be streamed to Skype, Twitch, Hangouts or any service that traditionally uses a webcam. It can also be instantly recorded as a movie. For now we're focusing on the portrait and the audio, but we aim to do more in the future.

Holotech Studios  [author] Jun 12, 2015 @ 5:58am
Hands are fow now key/mouse driven ( not tracked). First you need to enable them in the Avatar Behaviour tab (same place where you activate tongue) , then just shift+ left-right mouse clicks :D. More info is available on the FaceRig Forums or the the Community Hub- Guides section. :).

chimken nuggeget Sep 17, 2014 @ 12:22am
People who buy the beta should have an in-program reward such as a beta "accessory" that only beta testers can have. More people should buy it then.