Store Page
Train Simulator >  Workshop > Golden Goldsmith Scenarios.'s Workshop
This item has been removed from the community because it violates Steam Community & Content Guidelines. It is only visible to you. If you believe your item has been removed by mistake, please contact Steam Support.
This item is incompatible with Train Simulator. Please see the instructions page for reasons why this item might not work within Train Simulator.
Current visibility: Hidden
This item will only be visible to you, admins, and anyone marked as a creator.
Current visibility: Friends-only
This item will only be visible in searches to you, your friends, and admins. 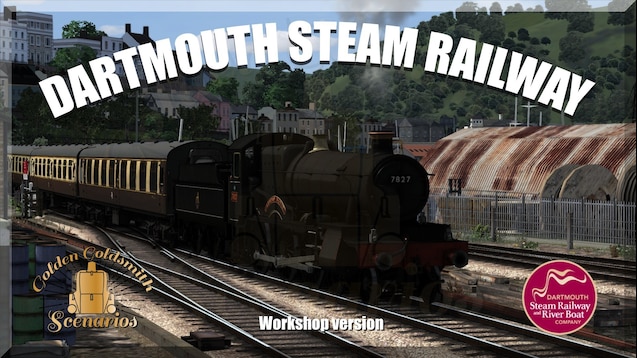 Golden Goldsmith Scenarios.
Offline
See all 4 collections (some may be hidden)
You need DLC to use this item.

This item has been added to your Subscriptions. Some games will require you to relaunch them before the item will be downloaded.
Description
DARTMOUTH STEAM RAILWAY ROUTE (REPRESENTATION)
(Please delete any older versions and make sure you allow updates)
The Paignton and Dartmouth Steam Railway, is a heritage railway on the former Great Western Railway branch line between Paignton and Kingswear in Devon. It is known for its fantastic scenery including three large viaducts, Goodrington Sands Beach and the run alongside the River Dart where Ferries connect to Dartmouth.

The line is very popular during the summer with tourists and Rail tours such as the Torbay Express and The Dartmouth Express giving plenty of scenario possibilities.


Here are a few shots of the major locations along the route...

Unfortunately, even though a lot of work has and is being put in to fix, there are still some known issues