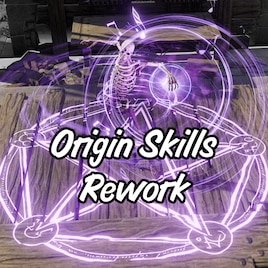 33 items
Description
Reworks the Origin skills to be more interesting, and more importantly, useful. None of the skills are locked into a particular build, meaning you're free to do as you please!

A list of all the skills and changes can be found here.[docs.google.com]
This mod requires the Norbyte script extender found here.[github.com]
Basic Descriptions
Don't like a skill?
If you like some but not all of the skills, there's good news! I've included a Tome of Origins that can be used to toggle between the vanilla (base game) skills and my own.

Play in another language?
You can help me translate this file by heading over to my Github for the project![github.com]

Open your language's folder[github.com] and then the .xml file. Click edit and begin translating away! Finally when you're done, submit it to be approved.

Compatibility
Fully compatible with my other mod Book of Origins which allows you to have choose your origin and racial skills on any character.

Feedback
I've spent a great deal of time on this project, so feedback is appreciated!

Thanks
Thanks to all those that gave feedback on the skills during development, including DerpyMoa and Odinblade, and to those like Norbyte, LaughingLeader, and Zerd who helped immensely with trouble-shooting issues.

Thanks to vrtra99 for the Japanese localisation!
< >
38 Comments

frasdoge  [author] Dec 31, 2020 @ 6:21am
@Alex There are mods on the workshop to extend the duration of all summons such that they never expire. I would recommend just using one of those ( for example this one by LL ) if summoning before combat is something you want to be core in your gameplay, placing all summons on equal grounds.

Alex Dec 31, 2020 @ 6:10am
May you add a configurable duration for Summon Soul Wolf, so its more Feasible to summon it before combat?

bird magnet Jul 21, 2020 @ 2:56pm
Question about Demonic Stare. It says it ends at the end of the turn, but it actually ends when you end your turn, as opposed to a turn in the whole fight. Is that intentional?

ThePiggyGalaxy May 26, 2020 @ 1:01am
@frasdoge, could you add the norbyte script extender logo in a corner of your thumbnail, it could provide clarity to those who dont use it and to those who do.

frasdoge  [author] May 21, 2020 @ 7:27pm
@Marlow I've just tried testing with all of those mods installed and applying a Fire Infusion to the Soul Wolf - no crash.

Could you contact me on Discord? I may need to get some crash logs or save files from you. My handle is frasdoge#1996

Marlow.LetsGoBrandon May 21, 2020 @ 9:14am
Occultist Overhaul, Summoning Tweaks + Permanent Summons, Summon Rework, and PDGM. Rest of the origin skills work great tho thanks!

frasdoge  [author] May 21, 2020 @ 1:00am
@Marlow Could you let me know of any summoning-related mods you may have installed, or perhaps any overhauls you are using?

Will be very helpful in tracking down what has gone wrong.

Marlow.LetsGoBrandon May 20, 2020 @ 7:07pm
The new soul wolf crashes when applying any of the elemental infusions in my modded game for some reason. I assume there is some compatibility issue with another summoning mod, but the vanilla wolf works fine.
< >