Greenlight > Software > The Game Creators's Workshop
Greenlight is being retired. For more information on how to submit games to steam, refer to this blog post.
This item has been removed from the community because it violates Steam Community & Content Guidelines. It is only visible to you. If you believe your item has been removed by mistake, please contact Steam Support.
This item is incompatible with Greenlight. Please see the instructions page for reasons why this item might not work within Greenlight.
Current visibility: Hidden
This item will only be visible to you, admins, and anyone marked as a creator.
Current visibility: Friends-only
This item will only be visible in searches to you, your friends, and admins.
FPS Creator Reloaded
Description Discussions4 Announcements5 Comments287 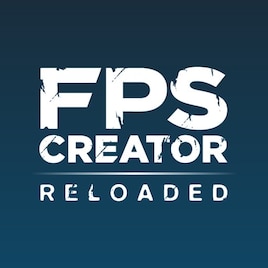 The very latest build of FPS Creator Reloaded has been released to all pledgers of the product. People who pledge via the main Reloaded site can get hold of Beta versions.

Editor
* Only show memory gauge when the memory usage grows over 25% to keep visuals cleaner.

LUA
* Entity "If Used" now works.
* All scripts can now include an _exit function (for example MySoldier_exit() ).
* SetEntityHealth(e,health) - can be used to set the health of an entity. If the new health is 0 then it will be destroyed.
* SetPlayerHealth(health) - assign a new health value to the player (total health).
* AddPlayerHealth(health) - adds additional health to the player
* CollisionOff(e) - turn off physics collision for this entity (handy for a custom entity perhaps dying, where you want to turn off physics so they don't move and play a death animation)
* CollisionOn(e) - restore collision for this entity
* SetPosition(e,x,y,z) - sets the absolute position of an entity, use only on entities with physics off (Note: If GravityOff(e) has not been called, positioned object will still align themselves with the terrain floor)
* SetRotation(e,x,y,z) - set the absolute rotation of an entity. Only for use on a non physics entity.
* ResetPosition(e,x,y,z) - reposition a physics entity
* GravityOff(e) - turns off non physics entities snapping to the terrain floor, handy to call inside _init
* GravityOn(e) - turns on non physics entities snapping to the terrain floor
* HurtPlayer(e,v) - injure the player, great for custom objects
* HideTerrain() - stop the terrain drawing
* ShowTerrain() - show the terrain again
* HideWater() - stop water from being drawn
* ShowWater() - show water again

We have released a FREE game demo called "The Escape" [fpscreator.thegamecreators.com], all built with the very latest version of FPS Creator Reloaded. It shows just what's possible with the world's easiest to use 3D game creator. Game players must escape a remote enemy compound and reach the extraction point, avoiding a myriad of clever A.I. enemies including the all new RPG wielding heavies!

Simon Keating, Game Designer of The Escape, had this to say about the process of making the game:

"The Escape did not take me long to make. To get the level as I wanted it I subtly tweaked entity positions, terrain, foliage, A.I. routes and game mechanics over a period of time, but the core playable level was made in under an hour. The easy interface in FPS Creator Reloaded allowed me to rapidly create my vision and when I found the flaws in my design I could quickly refine and test it until I was happy. For the first time ever, anyone with a desire to create an FPS game can bring one to life, and no special skills are required. If they want they can also share their map levels and let others edit them. FPS Creator Reloaded makes the process quick, painless, and most importantly fun. As more features are added over the coming months my game will only get better."

"With the features we have developed over these past few months, FPS Creator Reloaded can now be used to create high quality FPS games that are exciting, realistic and fun to play. The Escape shows the potential of what's possible by one game designer. By using new model media and A.I. scripts (many of which can be accessed from the online store) a whole host of different game types will start to appear."

The latest version of FPS Creator Reloaded brings significant enhancements including improved performance across a wide range of PCs, LUA based scripting commands for A.I. control, a full physics based game environment.

"We're now at the stage where we have the core of the engine complete. Moving forward we're publishing FPS Creator Reloaded onto STEAM in September as an Early Access title and we'll then focus on additional modules such as multiplayer, a construction kit for creating in-game buildings and a character creator. We're fostering a creative community and they along with us are getting more and more excited by the powerful and creative opportunities FPS Creator Reloaded is opening up." commented Lee Bamber, CEO and lead developer of The Game Creators.

Read More
Description
Release date: Mid 2014
The Ultimate FPS Game Creator for the PC - the defacto standard by which all other game making products will be compared. A solution that is easier, more powerful, affordable and flexible than any of its competitors. A product grounded and shaped by the community that gives it life.

With Reloaded you can easily create amazing looks game levels in minutes. You don't need any coding skills and we'll be actively adding more features as we evolve the product.

We'll embrace new and exciting hardware, acting as champions as we pioneer new experiences and in the process creating fresh new game creating communities. We'll expand the gaming possibilities of the engine as we move forward.

THE GAME WORLD
Large game levels – Construct huge games levels for your games.
Terrain editor – Take the fight outside with the terrain editing system. With easy to use controls you can create stunning vistas and unique environments for your games.
Infinite vegetation system – Vegetation is auto generated where you decide you want it to appear.

GAME PLAY
Inventory system – Players can pick up objects, barter with other characters and complete quests.
Environment – The player and AI Bots can walk, run, duck, climb and jump around any environment you design.
Bullet Tracers – Fire fights are made more realistic and spectacular with bullet traces as battle commences.

GAME CHARACTERS
Realistic characters – Enemy and allied characters are high in detail, able to talk and can be made to barter and offer rewards.
Animations – Dynamic and realistic animations bring the characters to life.
AI – Characters are now smart and equipped to navigate the environment and hunt you down.

PHYSICS
World Class Physics Engine – An advanced physics engine powers the collision effects inside FPS Creator Reloaded. At the core of the engine is the renowned Bullet Physics system, managing the numerous collisions during your games.

EDITOR
Play As You Go Technology – You can now edit and instantly play your game, providing a real time 3D preview Mode.
Optimised engine – The game engine is optimised for efficient use of memory, frame rate performance and graphic card compatibility.
Full screen render – In edit mode you can view game levels fully rendered and drop down into them instantly.

HEAD UP DISPLAY
Dynamic Fonts – In game messages use high quality fonts for a polished look.
Blood splat damage – The player's health is illustrated by blood splat damage to the screen.
Directional damage – A visual indicator hints at where enemies are attacking from.

HARDWARE SUPPORT
Oculus Rift - create a world and then walk around it with the new Oculus Rift hardware.

People who pledge, get a full version?
Alt-Knight

ItsMike Dec 22, 2014 @ 3:51pm
To all those hating on the engine... As a Gold pledger i know. I've been working on a horror game built in FPS Creator Reloaded, and it really is a great engine. TGC have done an AMAZING job with the engine, and the demo game is now much better. Trust me, things get better with updates, and if you pledge, they can get things done better much quicker.

The engine has not even been released on Steam yet, so you can't judge it. Good job TGC

The Game Creators  [author] Aug 24, 2014 @ 2:31am
@Ghettochicken - we have some competition games that our early adopters created. Would you be willing to take a look at them and give us some feedback? We're keen to learn what you think it lacking so we can make a great product. You can see and download the games here; http://fpscrgames.thegamecreators.com/?page=1
< >

FPS Creator Reloaded has been Greenlit and is now listed in the Steam store. For the latest information, purchase options, and discussions for FPS Creator Reloaded, please see it on the Steam Store or in the Steam Community.
Visit Store Page
For more details Visit Community Hub
For latest discussions
If you really, really want to, you can continue to the Greenlight page. Information on this page may be out of date, since all the action has moved to the areas noted above.