Store Page
Divinity: Original Sin 2>  Workshop > Element120's Workshop
This item has been removed from the community because it violates Steam Community & Content Guidelines. It is only visible to you. If you believe your item has been removed by mistake, please contact Steam Support.
This item is incompatible with Divinity: Original Sin 2. Please see the instructions page for reasons why this item might not work within Divinity: Original Sin 2.
Current visibility: Hidden
This item will only be visible to you, admins, and anyone marked as a creator.
Current visibility: Friends-only
This item will only be visible in searches to you, your friends, and admins. 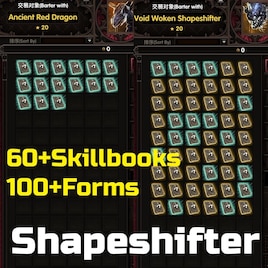 Element120
Online
See all 495 collections (some may be hidden)

This item has been added to your Subscriptions. Some games will require you to relaunch them before the item will be downloaded.
Description
Want to shapeshift into various kinds of forms? Here's the mod for you. Now you can shapeshift into almost every creature in the game, from the small crab to the huge kraken, over 100+ forms for you to choose.

(Forgive me for my poor English)
I tried two mods related to shapeshift: "Feenex's Battle Pack: Shapeshifting" and "Druid Class", but none of them satisfied me. They either limit the skills you learned or mute you directly when shapeshifted. Not only the requirements of learning these skills are too high but also the amount of the creatures you can shapeshift into is too few, around 20 forms. So i decided to make a new mod with mass amount of forms.
There are over 100+ forms you can shapeshift into, most of them can be learned form skillbooks directly and other skills will be added when you shapeshift into similar forms. For instance, when shapeshifted into a wolf, you get skills to shapeshift into black wolf, grey wolf and white wolf automatically.
You are also allowed to use your own skills (even if some animation can be incomplete).
You can choose "shapeshifter" as your preset class.
You are able to go through small doors or small places with huge size as actual size of some giant forms is reduced.

Notice
1.It's necessary to turn back before heading to next map or before going into the hall of echo to learn "Bless" skill, or you may meet weird bugs.
2.Even if you shapeshift into many forms without turning back, after canceling shapeshift, your size and portrait will not be changed. If your potrait changes, try to enter the respec mirror to reset the portrait.
3.Some forms include size change, when shapeshift canceled, size is returned. But you are still allowed to change to another form which do not include size change with the size when you are already in the forms include size change.
4.This mod is compatible with other shapeshift mod like "Feenex's Battle Pack: Shapeshifting", "Druid Class","Dragon Knight" and so on, but do remember not to mix using the mods.

Aedrion Jun 17, 2021 @ 9:06am
Oh! Hehehe! That's exactly the models I checked. I thought you'd included them separately. Thank you for including dragon forms by the way! I like to pretend-play as a dragon knight so it's amazing to have this!

Aedrion Jun 17, 2021 @ 2:26am
Is there a way to open the texture files for the dragons and tweak them? They're just 100% bronze or 100% green now and look like plastic toys. I'm hoping to maybe use the base Ice Dragon form and adjust hue/Saturation to translate that texture to other colours. But I can't find the actual Textures anywhere. :O