Store Page
RimWorld>  Workshop > informaniac's Workshop
This item has been removed from the community because it violates Steam Community & Content Guidelines. It is only visible to you. If you believe your item has been removed by mistake, please contact Steam Support.
This item is incompatible with RimWorld. Please see the instructions page for reasons why this item might not work within RimWorld.
Current visibility: Hidden
This item will only be visible to you, admins, and anyone marked as a creator.
Current visibility: Friends-only
This item will only be visible in searches to you, your friends, and admins. 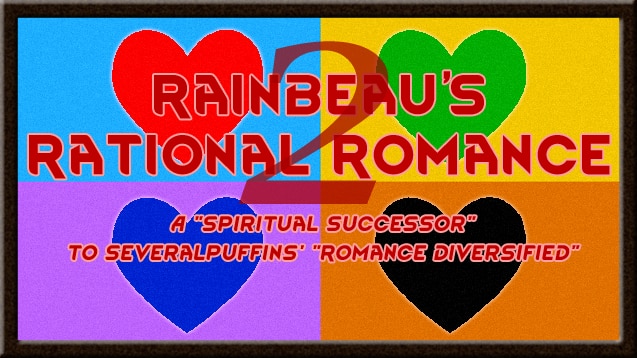 informaniac
Online
See all 867 collections (some may be hidden)

This item has been added to your Subscriptions. Some games will require you to relaunch them before the item will be downloaded.
Description
The original page can be found here:
https://ludeon.com/forums/index.php?topic=46165.msg440265#msg440265


Since Rainbeau Flambe has stopped developing mods for Rimworld, I have decided to update and maintain this project. Besides updating this mod to 1.1, I have added a few features and performance fixes to the project. This includes a change to how many times a pawn can try to hook up with the same pawn, and how likely people can be romanced to genders they are not attracted to. I have also added a slider for Misogynists and Misandrists for how likely they are to be attracted to the gender they hate, and changed the likelihood that these bigots will successfully romance the other person. (The end result is less breakups from pawns who naturally hated each-other.)

"Rational Romance" overhauls RimWorld's romance system, fixing some problems and adding some new options. Think of it as a "spiritual successor" to SeveralPuffins' popular but sadly abandoned a17 mod, "Romance Diversified."

(1) Adds Orientations. All pawns will now have a trait indicating their sexual orientation, either asexual, bisexual, gay or straight. (Don't worry; the mod doesn't "waste" a trait slot on this, as orientation traits are assigned only *after* regular trait assignment is complete.)

By default, pawns have a 50% chance to be bisexual, a 20% chance to be gay, a 20% chance to be straight, and a 10% chance to be asexual. I set the percentages this way because biological, sociological and historical evidence strongly suggest that, in the absence of cultural imperatives to the contrary, bisexuality is actually the "default" status for most humans. However, the percentages are all configurable in the mod's "options" menu, so you can set things up however you prefer for your own games. If you're radically heterosexist and don't want any gays in your colony, go right ahead and set the mod to make pawns 100% straight. On the other hand, if you want *all* your colonists to be queer, more power to you! And if you just want to play on a planet full of asexuals, where nobody worries about romantic entanglements at all, well, you can do that, too.

(And yes, I'm aware that I'm using certain terms rather loosely. "Bisexual" isn't the only or even necessarily the best term to describe someone whose romantic interests are not governed by gender or gender presentation, but it's a convenient and widely familiar term that fits the mod's needs. Similarly, while I know that not all asexual individuals are aromantic, the game draws no distinction between romantic and sexual relationships, and so the use of the term "asexual," though not strictly accurate, is convenient. On a related note, sadly, there's really nothing I can do to correct the fact that the game forces pawns to conform to the idea of a gender binary.)

(2) Adds New Traits. The mod adds two new traits, "Faithful" and "Philanderer," which influence how likely a pawn is to cheat.

(3) Adds New Activities. The mod adds long walks as a date option for couples, allowing them to socialize and improve their relationships. It also adds casual hookups as a joy activity for single pawns.

(5) Makes Culture Matter. There is now a cultural component to pawns' romantic interactions, with female pawns from tribal and imperial backgrounds more forward (more likely to initiate romantic encounters or to propose marriage) than males from those cultures, and male pawns from medieval and urbworld backgrounds more forward than females from those cultures.

(6) Adds Support for Polyamory. Polyamorous pawns prefer relationships involving multiple partners to simple monogamous relationships. You can decide in the mod's "options" menu how likely pawns are to be polyamorous. Like the orientation traits, Polyamorous is an "extra" trait assigned after normal trait assignment is complete, so allowing pawns to be polyamorous won't in any way limit their access to other traits. The default chance for polyamory is 0%, as the system isn't yet fully tested, and even if it all works as intended, it may still complicate colony management in unexpected ways. If you do want to include polyamorous pawns in your games, I strongly encourage you to also use Meltup's "Polyamory Beds" mod, which will allow you to more easily accommodate your pawns' desired sleeping arrangements:
https://steamcommunity.com/sharedfiles/filedetails/?id=2008138191

(7) Adjusts Romance-Related Mood Penalties. Penalties and/or stack limits for rebuffs and other romantic failures have been reduced. You should no longer see pawns hitting on someone a few times, getting rejected, and then going on a murder spree as a result.

(8 ) Fixes Some Problems in the Game's Romance-Related Code. Female pawns will now be just as likely as male pawns to initiate romance attempts or to propose marriage. Gay pawns will be no less likely than straight pawns to be parents. And male and female pawns will both now prefer partners near their own age but potentially accept either younger or older partners, unlike in vanilla, where men have a strong preference for younger women and women for older men.

This mod is fully compatible with "EdB Prepare Carefully."

This mod is NOT compatible with "Psychology." You may or may not actually notice any problems if you try to use them together, but the mods both alter some of the same vanilla code, and if they're both installed, neither will be operating entirely as intended. For similar reasons, "Rational Romance" isn't likely to be compatible with any other mods altering RimWorld's romance systems, either.

Obviously, "Rational Romance" owes a great deal to SeveralPuffins' "Romance Diversified." In particular, the code for the new social activities comes directly from that mod. Other mods from which I borrowed code bits and/or ideas include "Less Stupid Romance Attempt" by Dazz Aephiex (for improvements to romantic behavior), "Grim Reality" by SheiFoxy (for alterations to mood penalties), and "Everyone is Queer" by Suzi (for general problem fixes).

Some of the code related to polyamory is borrowed from Linq/Word-Mule's "Psychology" mod.

Dreagon Jul 30 @ 6:38am
@thekittymix For me it prevented factions from being generated on the world map besides 1 settlement each for the 2 outlander factions.

flashwitt Jul 28 @ 10:27pm
Fantastic overall, but you're right about polyamory's complications. First, I've several times had poly toons in relationships with another poly toon, but both are unhappy because they are in a "mono" relationship. As far as I can tell, there's no way to be in a relationship with multiple toons, since dating more than one toon is instantly counted as "cheating" by the game, and the relationship with the poly partner is dissolved. What's more, they are marked as miserable because their partner "cheated", and hold a grudge against the ex for having done so. I've tried to disable some of this using the Quality of Life mod, but there doesn't seem to be any way around these issues from within the game.

Vae Victis Jul 24 @ 11:49pm
Wording in the description has inspired a lot of political-type responses in the comments. FANTASTIC! Yet another place that has been defiled by talk that has absolutely NOTHING to do with the game.

Makkli Jul 21 @ 3:02pm
@jellyjayne wow, that sounds like the most realistic situation possible.

jellyjayne Jul 18 @ 12:19am
This mod doesnt seem to be working properly for me...for example, asexual pawns are still getting into relationships, misandrist pawns being bisexual and bisexual male pawns trying to hook up with straight male pawns. Not sure whats going on?
< >