Store Page
Arma 3>  Workshop > {RP}Alan's Workshop
This item has been removed from the community because it violates Steam Community & Content Guidelines. It is only visible to you. If you believe your item has been removed by mistake, please contact Steam Support.
This item is incompatible with Arma 3. Please see the instructions page for reasons why this item might not work within Arma 3.
Current visibility: Hidden
This item will only be visible to you, admins, and anyone marked as a creator.
Current visibility: Friends-only
This item will only be visible in searches to you, your friends, and admins. 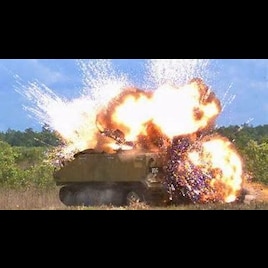 {RP}Alan
Offline
See all 117 collections (some may be hidden)

This item has been added to your Subscriptions. Some games will require you to relaunch them before the item will be downloaded.
Description
Please leave a like and subscribe and share this mod if you llike it.

This mod adds special effects such as explosions, cook offs, fires and buring crews to the range of Real Panzer mods such as:

This mod works with CUP and RHS if you load Real Panzer A3 as well as this mod. That is the mod linked at point 4 above.

All these tanks have included in their code an event handler that activates this SFX package but also stays silent if the mod is not loaded.

The package is included separately because:

Other than that it is great and adds more depth and interest to playing these games.

This work is based on the tankscript created by champion modder PIONEER for his Liberation mod and who gave me kind permission to use and mod his work in the true spirit of open source modding that made the ARMA series the great game it is today.

Here is my tip jar:

The joke is that is happened by accident and I have no idea how or what change I made caused it to happen! It took me by surprise too. Flares, ATGMs, tank rounds, it all cooks off.

Frosted Vert Nov 19, 2020 @ 7:21am
A great touch in Global Mobilization is the cook off includes the flares stored in AFVs. Good work.

Thanks for using the mod and commenting.

It is a standard setting and there is a one for vehicles not listed but in the tank F class and each vehicle can be individually customised in a list. If the vehicle is not on the list with its own special settings then the one size fits all code applies which on some vehicles will be too high.

If you let me know which vehicle it is I can have a go at doing a customised cook off flame by adjusting the flame height in the code. I did that for some of the IFA3 vehicles.

KingKurdes Jul 13, 2020 @ 5:52am
Hello, thanks for this great mod! On some tanks the cook off is to high above the tank, is there something i can do about it?

No reason why not.

If any thing strange happens try changing the load order.