Greenlight > Games > HuGames's Workshop
Greenlight is being retired. For more information on how to submit games to steam, refer to this blog post.
This item has been removed from the community because it violates Steam Community & Content Guidelines. It is only visible to you. If you believe your item has been removed by mistake, please contact Steam Support.
This item is incompatible with Greenlight. Please see the instructions page for reasons why this item might not work within Greenlight.
Current visibility: Hidden
This item will only be visible to you, admins, and anyone marked as a creator.
Current visibility: Friends-only
This item will only be visible in searches to you, your friends, and admins.
Final Slam 2
Description Discussions3 Announcements5 Comments9655 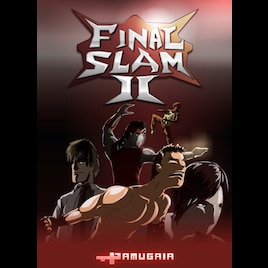 HuGames
Offline
See all 34 collections (some may be hidden)

View Final Slam 2 in the store

Thank you all! Just a final push and we will enter in the Top 100!

Remember that if you have bought the game in the Indie Royale Bundle you will get a Steam Key as soon as we have a release date. Besides, if you want a Steam Key, you can get a free copy of the game with Who's Gaming Now?!

Climbing up every day a bit further!

Remember that if you have bought the game in the Indie Royale Bundle you will get a Steam Key as soon as we have a release date. Besides, if you want a Steam Key, you can get a free copy of the game with Who's Gaming Now?!

Thank you all for the support!

Read More
Description
Release date: 2014
Customize your fighter (80 slots to save your avatars) with tons of different options and get ready to fight into the Championship.

Final Slam 2 is a PC fighting game that allows you to create your own fighter and win the Final Slam championships or play through the official Final Slam story in story mode. The game is packed with over 40 in-game fighters, but you can still create your own fighters by customizing his or her attire, moves and stats. You can even adjust the Artificial Intelligence of your fighter! Create yourself. Create your friends. Create your enemies. Create casual guys, ninjas, movie stars, wrestlers, shaolin monks, kung fu fighters, boxers, warriors, robots, game characters and even monsters. Then fight!

Demo of the game:
{LINK REMOVED}http://www.desura.com/games/final-slam-2

Game Features
FAQS
Can I play a demo of Final Slam 2?
Yes, you can download the demo of the game in Desura: {LINK REMOVED}http://www.desura.com/games/final-slam-2

Can I already buy Final Slam 2 anywhere else to support Tamugaia?
Yes, you can buy it in Desura's store: {LINK REMOVED}http://www.desura.com/games/final-slam-2
< >
9,655 Comments

Final Slam 2 has been Greenlit and is now listed in the Steam store. For the latest information, purchase options, and discussions for Final Slam 2, please see it on the Steam Store or in the Steam Community.
Visit Store Page
For more details Visit Community Hub
For latest discussions
If you really, really want to, you can continue to the Greenlight page. Information on this page may be out of date, since all the action has moved to the areas noted above.