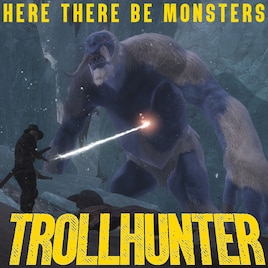 Araanim
Offline
See all 51 collections (some may be hidden)
You need DLC to use this item. "No, you're wrong about that. There's nothing heroic about what I do. It's dirty work."
-Hans, the Trollhunter

The dreaded troll may be the most well known monster in all of Tamriel.  It lives in every corner of the continent and has haunted Man and Mer since time began.  The history of Tamriel is filled with stories of valiant heroes hunting down trolls and defending their villages.  But there are older stories, stories from ancient times that speak of trolls as ancient and massive as the hills and stones themselves, trolls that have been swallowed up by nature and become one with the landscape.  It is said that these monsters sleep just below the surface, and that one day they will emerge from earth that holds them prisoner and destroy the people of Tamriel.

There is a man named Hans, the Trollhunter, who has discovered these monsters and has vowed to destroy them before they can awaken.  Find him, and finish his work before it's too late!
________________

This mod adds five massive trolls to various locations in the world, that will take a little bit of investigation to find and awaken.  The quest is fairly barebones, and will require more exploration and investigation to find these monsters.  Each one is unique and will offer a very different experience to battle!  It also adds a uniques set of Trollhunter gear that can be upgraded and adapted to suit your play style.

Real-world myth:  The "Mountain King" in the Norwegian fairy tale "Per Gynt."

Location:  Sleeps in the glacier below Castle Karstaag.

Real-world origin:  Based on the lake-troll in the song "Awaken" by the band Dethklok, and the corresponding episode of the cartoon "Metalocalypse."

Real-world origin:  Named after a hill-troll in a Danish fairy tale.

Location:  Sleeps beneath the hills near Shor's Stone.

Real-world origin: Named for a rock-troll in Marvel's Thor comics, one of Thor's nemeses.

Location:  Sleeps in the Forsworn settlement at Cradle Stone Tower.

Real-world origin:  Based on the troll-like monster from the Old English poem "Beowulf."

Location:  Sleeps beneath the marsh north of Morthal.

-Giant monsters tend to glitch a bit.  I've tried to optimize their size and environment to help this, but a little weirdness is inevitable with creatures this size.

-While this is a sequel to Here There Be Monsters *in spirit* it does not actually require the original mod.  There is no real crossover, other than Hans mentioning a monster hunter in his journal.

-It seems like a shame to just kill off Hans.  I'd love to make him a full follower.

Here are some great mods by other authors that really add to the experience:

Stand On Your Enemy﻿

Here There Be Monsters - Call of Cthulhu[www.nexusmods.com]﻿
< >
35 Comments

zekeapple Aug 23, 2020 @ 1:52pm
i think i have a bug, when im looking for these monsters the game CRASH, i mean literally the screen its frozen and i have to restart the computer, its happens when im on the marsh and forsworn settlement. Can you help me? PLease

GGMASTERIS Aug 14, 2020 @ 1:29pm
Guys i just found Hans. In Solstheim go to the ruins of Castle Karstaag and go a bit north there you will find some Riekling Horkers and Hans himself

Bleuuu Jun 25, 2020 @ 4:15am
I call upon the ancient lords of the underworld
To bring forth this beast and
Awaken