Store Page
Garry's Mod>  Workshop > P̴̡̟̭̥̂̌̂̆sycedeliCum's Workshop
This item has been removed from the community because it violates Steam Community & Content Guidelines. It is only visible to you. If you believe your item has been removed by mistake, please contact Steam Support.
This item is incompatible with Garry's Mod. Please see the instructions page for reasons why this item might not work within Garry's Mod.
Current visibility: Hidden
This item will only be visible to you, admins, and anyone marked as a creator.
Current visibility: Friends-only
This item will only be visible in searches to you, your friends, and admins. 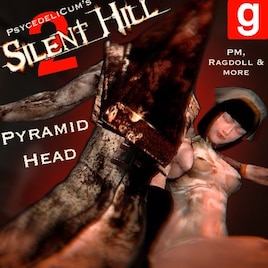 This item has been added to your Subscriptions. Some games will require you to relaunch them before the item will be downloaded.
In 1 collection by P̴̡̟̭̥̂̌̂̆sycedeliCum
Psycedeli's Silent Hill Collection

10 items
Description
INTRODUCTION
The antagonist of Silent Hill 2 is the equal parts evil horror and the traumatic guilt of the game's protagonist made flesh. Pyramid Head is terrifying, not just because he's the stuff of nightmares, but also because he's invulnerable to the player's attacks.
- Silent Hill Wiki

"You want it? It's yours my friend. Now here's your beloved ra-pist." -Psycedeli

Pyramid Head SH2(Default)
Pyramid Head was once the executioner in the old cult of Silent Hill. James' subconscious used the image of him to punish him for what he had done. He is seen throughout Silent Hill, stalking James.

The Great Knife
Figured I should prolly make a prop of it.

[01] Hand posing not possible yet.

[02] Eye posing may not be compatible from the get-go.

[04] Expect further tweaks (although not limited to the above).

The Doctor Of Poop Apr 15, 2020 @ 4:41pm
I loved the model. Is it ever going to get an updated version? I can't seem to be able to pose the fingers. and it has a couple invisible parts under the pyramid. Still, really cool for wallpapers.