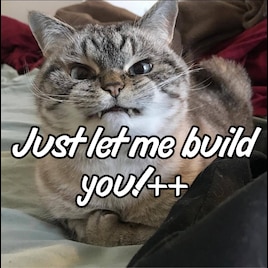 This item has been added to your Subscriptions. Some games will require you to relaunch them before the item will be downloaded.
In 1 collection by frasdoge
frasdoge's Mod Collection

14 items
Description
If you're sick and tired of recruited characters coming with awful ability or attribute spreads, this is the mod for you. In fact, there was already a mod for you called Just Let Me Build You by Kalavinka.

However, their mod had a few problems I wanted to address, so I bring you Just Let Me Build You!++.

How it works
Differences to the original
Why use this when there's a respec mirror?
Permissions
Kalavinka gave me the thumbs up to publish this improved mod, and while the coding and features are new and done by myself, the concept is certainly theirs. Big thanks to the folks over at the Larian discord for helping me get into scripting too!

Recommended mods
An extension for Odinblade's mods if you'd like to obtain their starter skills and items in the same manner.

Refund Race-Based Civil Abilities to get full control over your own and your parties civil abilities.

If you want some more memory to take advantage of the skills then I've got a balanced Mini Memory Buff available.

I also have a toned down version of this mod in my workshop here where you don't get any skills or weapons - it just resets the points.

Mod Authors
If you would like your skills to work with this mod, simply add the following database definition for each skill you want to add in a Story Script INIT section.
DB_JLMBYpp_StarterSkills((STRING)_Ability, (STRING)_MyAwesomeNewSkill);

If your class adds custom items, you can also have them added onto the player by adding another database definition and creating a treasure table in the stats editor.
DB_JLMBYpp_HasReceivedToItem((STRING)_Ability, (STRING)_TreasureTableName);

If your mod adds innate talents to the character and you want them to work properly with this mod, then add the following database definition to your mod for each talent.
DB_JLMBYpp_InnateTalents((STRING)_Talent);

Demonic's Gaming Domain Jan 31, 2021 @ 10:59pm
Neither the original mod or this works after recruiting ifan.

frasdoge  [author] Jul 29, 2020 @ 2:33am
@kraftwerkd This mod doesn't give you memory points, so with only 3 skill slots it can't equip all 8 skills after character creation (obviously). You will have to manually slot which 3 of 8 you want to equip.

Maybe I could make it keep the 3 you originally selected be slotted straight away, but no one's ever mentioned wanting that before.

kraftwerkd Jul 28, 2020 @ 8:29am
Not sure if this is a mod issue or a compatibility issue, but I've run into something. At char creation, say I'll pick Searing Daggers, Fossil Strike and Poison Dart. But once loading into the game, it defaults me with the three starting skills from Pyro. The Geo skills are still in my hotbar, just greyed out because they're not memorized.

Not a huge issue, just have to remember to reset those once loading in. This only happens on a new game as far as I can tell.

frasdoge  [author] Jun 7, 2020 @ 5:16pm
@Someone64 The issue you were encountering is not relevant to PtbB though, if the patch I made did indeed fix it for you. The code for the projects if you want to check out why: PtbB [github.com] & JLMBY++ [github.com].

The reason I mentioned Prepare to be Built is because this issue happens with it, too. Tried using it in hopes of stopping the issue from happening (switched mid game because I had a lot of spell books lying around anyway) and it caused it just as much as Just Let Me Build You++ did before.

The changes I've made in this case aren't applicable to PtbB, but I appreciate the reminder as they use much of the same code.

Samoan64 May 31, 2020 @ 7:19am
I tested it and I'm not sure if it's fixed because I don't know how to consistently reproduce it but it didn't break at all so far. It DID actually refund everything to one of my characters upon loading the save and letting my friend join and control her. I think it refunded her before the friend joined, though but I'm not so sure. Thanks for fixing it! I'll watch out for any other problems.

May I request updating Prepare to be Built with these fixes, too?

frasdoge  [author] May 31, 2020 @ 3:20am
@Someone64 I've updated with a potential solution. Let me know if it fixes things or not, it's really a strange issue that could have a different cause than what I presumed.
< >