Store Page
RimWorld>  Workshop > Arcjc's Workshop
This item has been removed from the community because it violates Steam Community & Content Guidelines. It is only visible to you. If you believe your item has been removed by mistake, please contact Steam Support.
This item is incompatible with RimWorld. Please see the instructions page for reasons why this item might not work within RimWorld.
Current visibility: Hidden
This item will only be visible to you, admins, and anyone marked as a creator.
Current visibility: Friends-only
This item will only be visible in searches to you, your friends, and admins. 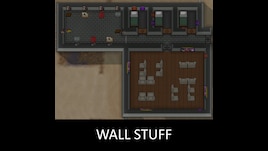 Arcjc
Offline
See all 363 collections (some may be hidden)

This item has been added to your Subscriptions. Some games will require you to relaunch them before the item will be downloaded.
Description
Adds Wall Mountable Items To The Game,
Items Included:

Wall Mounted Climate Controller (Controls temperature around a set value, heating and cooling as needed, uses the power values from the heater and cooler)

Wall Mounted Replicator (1000W power usage can spawn a specific item(s) on a changeable time window, available items can be switched with a button for each replicator (this resets the timer) the list of available items is configurable in the Mod Settings (With thanks to the QuarryMod where I stole most of the saving code from)

Wall Mounted Tool Board (2 cells, does the same job as a vanilla Tool Cabinet, stuffable so can be made from Wood, Plasteel etc.)

If the RT Fuse mod ( steamcommunity.com/sharedfiles/filedetails/?id=728314182 ) is present:
Wall Mounted Circuit breaker (1 cell, designed to handle 3 of the wall mounted batteries so slightly less powerful than the default 2 cell version from RT Fuse)

Power levels of the heater and cooler are also configurable in the mod settings.

Arcjc  [author] Jan 22 @ 8:28am
@dinhkhiem199833 Would it be possible for you to send a screenshot or something through so I can see ? Was working when I last checked so bit confused.

dinhkhiem199833 Jan 21 @ 6:14pm
I've encountered a bug where the wall switch does not connect the grid. Like, when I turn on the power layout (which is usually the blue line), there is no blue line at the wall switch.

Alexander Zagirov Dec 21, 2021 @ 2:36pm
I think it would be best to put replicator’s cycle duration in to mod setting. Default should be probably around 1 week. And research itself should be tied to some other endgame research projects otherwise you can research and build it almost at the beginning of the game and it becomes too OP. And I’m not even talking about the fact that infinite supply of almost any limited stuff in the game already feels like cheating even at a cost of 1000W. Other than replicator everything else is great 😊

Luke Nov 1, 2021 @ 6:26pm
Is there a way to turn off the notifications for something being produced by the replicator?

Kuuchuu Oct 2, 2021 @ 9:21pm
If you ever get the time to add in an in-wall "loudspeaker" I would be eternally grateful. The current ones just seem out of place and take up a good bit of my sanctuary. Thanks for the great mod!

Arcjc  [author] Sep 2, 2021 @ 8:41am
@randomvortex Yeah sorry from looking into how that mod works the author has created a new Power Switch that extends the vanilla one so I wouldn't be able to just patch it in would need to be a bit more complicated than that :(