Store Page
Arma 3>  Workshop > PointForward's Workshop
This item has been removed from the community because it violates Steam Community & Content Guidelines. It is only visible to you. If you believe your item has been removed by mistake, please contact Steam Support.
This item is incompatible with Arma 3. Please see the instructions page for reasons why this item might not work within Arma 3.
Current visibility: Hidden
This item will only be visible to you, admins, and anyone marked as a creator.
Current visibility: Friends-only
This item will only be visible in searches to you, your friends, and admins. 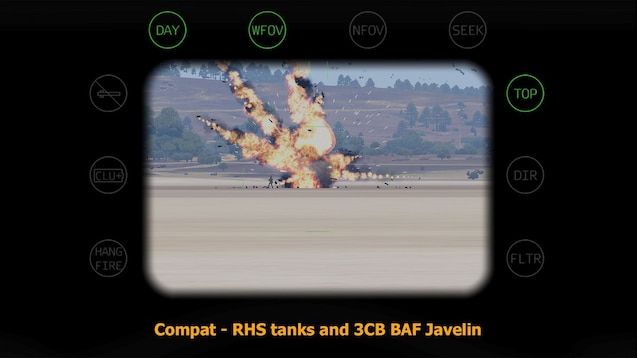 PointForward
Offline
See all 10 collections (some may be hidden)

This item has been added to your Subscriptions. Some games will require you to relaunch them before the item will be downloaded.
Description
Do you play with RHS mods and 3CB BAF Weapons? Do you use the 3CB Javelin launcher at the same time?
And more importantly is the launcher simply not effective against RHS tanks? If so, you have same issue I had and this mod is a small fix.

While not perfect against relatively fast moving targets, I have had great success against slowly moving or stationary MBTs including modern (2012+) T-72s and T-90s.

You will need RHS mods and 3CB BAF Weapons loaded for this to work (obviously).

For compat of base game Titan AT with RHS tanks look here.

You can find the source code on GitHub.[github.com]
< >
2 Comments

PointForward  [author] Feb 9, 2020 @ 3:43pm
Well, not at the moment, as this is less aboit making ammo compatible with the weapon(s) and more about switching out a part of the missile (essentially) for one that is balanced against RHS already.

I might take a look at true compats sometime later, but I have another project in works now.