Store Page
Arma 3>  Workshop > Nemo's Workshop
This item has been removed from the community because it violates Steam Community & Content Guidelines. It is only visible to you. If you believe your item has been removed by mistake, please contact Steam Support.
This item is incompatible with Arma 3. Please see the instructions page for reasons why this item might not work within Arma 3.
Current visibility: Hidden
This item will only be visible to you, admins, and anyone marked as a creator.
Current visibility: Friends-only
This item will only be visible in searches to you, your friends, and admins. 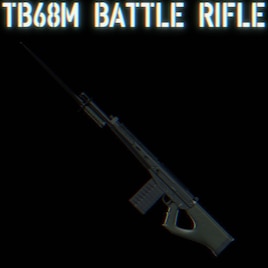 Nemo
Offline
See all 46 collections (some may be hidden)

This item has been added to your Subscriptions. Some games will require you to relaunch them before the item will be downloaded.
Description
Project funded in part by the Green Sea Battalion.

TB68M Battle Rifle
The TB68M is the latest domestically produced standard battle rifle of the Chernarus Green Sea Battalion. A direct successor to the TB68, the M delivers the same potent 6.5x68mm round from a lighter weapon system. The M has additionally been designed to support the use of the TB50RG, a 50mm rocket-assisted rifle grenade capable of a max engagement range of one kilometer.

The bayonet can be found in the bipod section of the TB68M's attachments. The default keybinding to use the bayonet is T. This key can be changed in control options > addon options > TB68M Battle Rifle > Bayonet Stab.

This project is a work in progress. The following updates are planned for the near future:

For project inquiries add me on Steam or email me at andrew.e.trueblood@gmail.com

Nemo  [author] May 27 @ 7:31am
Undefined ACE ballistics values for the weapon like ACE_twistDirection just means it uses ACE's default values. The weapon seems by my testing to perform with ACE equivalently if not better then a weapon of its same class. I may be overlooking something though.

Teufel Hund May 27 @ 2:13am
It seems woefully under powered for a 6.5x68mm round when used with ACE. I did multiple tests firing at AI wearing body armor, and 20 rounds to the chest at 100m failed to drop them, only showing minor bruises, minor wounds, and slight blood loss. I also noticed that ACE lists no muzzle velocity for the round in the arsenal specs.

I saw in the change notes that you added support for ACE Ballistics. I took the liberty of opening up the PBO to look around, and it looks like you left out some lines for Ace Ballistics.

Other than that, beautiful model. Love the rifle grenades, and can't wait to see more options for them.

Nemo  [author] Apr 8 @ 1:54pm
Not this week, probably not next week, but definitely before the month is over. That's the best I can judge with everything that's going on at the moment. Haven't been home much.

von Graf Feb 12 @ 4:15am
Will there a JRSR sound compat-file in the future like the other weapon has?

Nemo  [author] Feb 10 @ 10:09pm
I'm currently working on that. The texture tweaks will come with the drum magazine and some other stuff later this week.

honger Feb 10 @ 10:07pm
Is there any chance to have the gun's texture more metallic like TB68 or ChARs (from GSB Gear) have?