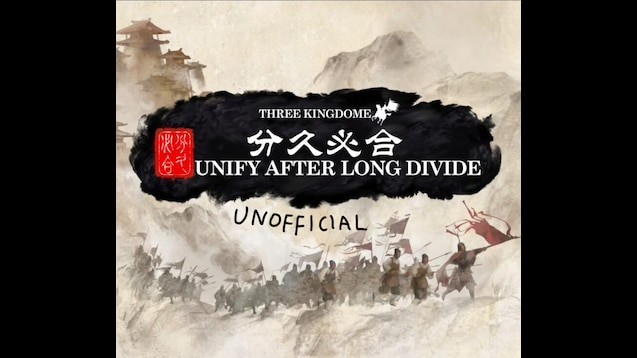 [REDACTED]
Offline
See the collection (may be hidden)

This item has been added to your Subscriptions. Some games will require you to relaunch them before the item will be downloaded.
Description
Since the primary translation, the official one, hasn't been updated since June 2019, this is a second translation that builds off the small collection of translations and extends the English language across the mod.


Unity After Long Divide is a campaign overhaul mod focused on historical accuracy. It reworks population, income, recruitment, army quality, starting settlement/population values and more, to better represent China as it was at the time.

With this translation, the mod should be entirely playable, if you can tolerate a bit of Baidu/Google translate here and there. In particular all core mechanics should have entirely understandable labels and such, while perhaps some of the unit descriptions lean towards a less... naturalistic translation.


Any suggestions for improved translations, edits, seriously janky translations, etc please post in the comments, I'll do my best to improve it. If you notice some text that should be there but isn't (and is blank), then that's untranslated Chinese text. Shouldn't exist, but if you find it then do share for us all.

Installation
To play Unity after Long Divide (UAD), subscribe to Part 1 and 2, and load this translation after both parts in the mod load order. Make sure you have compatibility/patch mods and such for anything that changes startpos, including Make them Unique or All Factions Playable.


DISCLAIMER: This is 100% unofficial, I have zero affiliation with the Unity after Long Divide team, just something I made to make this mod playable for English players.
< >
10 Comments

applejuice Feb 8, 2020 @ 9:15am
idk if this is a fault in the translation but the stats for heavy and standard shot are switched

Triplecount Feb 8, 2020 @ 8:40am
i love you so much! anyway there's the old translation mod, maybe you can take the new unit name from that mod?

Aeon_Black Feb 8, 2020 @ 3:45am
Just to note UAD also has compatibility patches also containing text which requires translating
It may also be useful to expand on the installation section with full load order as UAD lists them quite extensively depending which patches are used
Also as reference some text is already translated in Z's English Mod as Alex Zhao merged some of his mods into UAD