Store Page
Kenshi>  Workshop > Serpy's Workshop
This item has been removed from the community because it violates Steam Community & Content Guidelines. It is only visible to you. If you believe your item has been removed by mistake, please contact Steam Support.
This item is incompatible with Kenshi. Please see the instructions page for reasons why this item might not work within Kenshi.
Current visibility: Hidden
This item will only be visible to you, admins, and anyone marked as a creator.
Current visibility: Friends-only
This item will only be visible in searches to you, your friends, and admins. 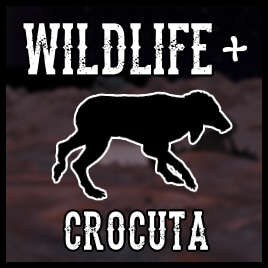 Serpy
Offline
See all 63 collections (some may be hidden)

This item has been added to your Subscriptions. Some games will require you to relaunch them before the item will be downloaded.
Description
Wildlife+ is a series of mods intending to expand the current roster of wildlife in game. This entry adds in two entirely new factions and six individual creatures to the game, building on the current roll call of canines.

Faction Overview
The Hyaenidae faction currently includes four members, the Dire hyena, the Slough hyena, the Grievous hyena and the Fell hyena. They are found in various places throughout the world and vary in size, speed and strength. The Hyaenidae factions relation with the Wolves (aka bonedog) faction lies in the negatives, meaning it isn't uncommon to find the two species fighting turf wars out in the wild. Dire hyenas have even been seen integrated into rebel farmer patrols.

The Crocuta faction currently includes two members, the Orion crocuta, and the Verglas crocuta. They are large and dangerous beasts, who lurk in solemn areas of the globe. Orion crocuta can be found in Skinner's roam hunting bulls they find there, whereas the Verglas crocuta has evolved to live in such a hostile environment as the Ashlands. The former can be hunted for their pelt, whereas the latter can be looted for their claws, which sell for high prices... if you can kill one. They are also extremely hostile to any animal that falls under the herbivore faction.

Other features
Included is a custom start, regarding a holy nation drifter with three hyena companions.
"Having tamed and trained many hyenas across the Holy lands in their time, this drifter has longed to see the outside world despite all the warnings his brothers and sisters shared. With three of his most loyal and obedient beasts by his side, he sets off to explore the outer regions of the world."

Hyenas/crocuta can also wear backpacks! You'll find these backpacks in places you regularly find them. Hyena backpacks are smaller than crocuta ones, and carry less weight.

You can tame any of these animals in a similar fashion to TameBeasties by placing them inside a cage and talking to them.

Tkun Icestep Mar 23 @ 11:41am
I was able to KO an Orion and put it in a cage but I'm not getting an option to talk to it at all. I reloaded and restarted the game but still no talk to option.

Grabbles Feb 23 @ 10:11pm
@Snowy, there is actually a guy working on a mod like that on reddit

Snowy Feb 21 @ 3:22am
@Serpy, Hey, love the mod, I feel the bags are alittle overpowered and I can't just use the snack bags from better feeding, but that aside I love this. Aside from that however I had a random, terribly silly idea along the lines of the goat man mod, would it be at all possible to create a race with the Hyena heads, effectively creating Gnolls in Kenshi similar to the Goatman mod.

Drewisaname Feb 20 @ 11:44pm
why are they EVERYWHERE? I literally cant look away or my entire group is wiped. Dont understand why they are literally everywhere. Tone down spawns please.
< >