Greenlight > Games > Super Tea Studios's Workshop
Greenlight is being retired. For more information on how to submit games to steam, refer to this blog post.
This item has been removed from the community because it violates Steam Community & Content Guidelines. It is only visible to you. If you believe your item has been removed by mistake, please contact Steam Support.
This item is incompatible with Greenlight. Please see the instructions page for reasons why this item might not work within Greenlight.
Current visibility: Hidden
This item will only be visible to you, admins, and anyone marked as a creator.
Current visibility: Friends-only
This item will only be visible in searches to you, your friends, and admins.
Conspiracy Prophecy 2017
Description Discussions3 Announcements4 Comments117 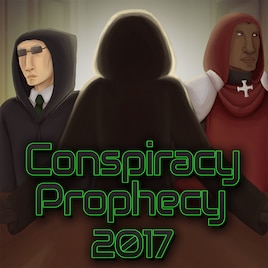 So due to popular demand, we've completely revamped the look of the game. Content has remained exactly as is, however the game now is played in an entirely 2D setting. Not only does this give us far more freedom with our art style, but it gives the game a cleaner interface and makes it less clumsy as a whole.

We are very excited to debut the new look! We are putting the finishing touches on it and a trailer will follow shortly - as will a look at some of the newest events ... if the Illuminati will allow us!

We have released a new trailer as well as some new screenshots. There is more to come very soon but for right now check out our new boardroom scene and the world map! Let us know what you guys think!

Read More
Description
It's all true, every last bit. The Illuminati are real, Aliens are real, the New World Order is real. All governments are simply leading flocks of mindless Sheeple. They are puppets put in power by the Earth's real masters ... and you're in charge of the whole operation. Take the head seat of the New World Lunar Order Council Base and decide the fate of the world, one crisis at a time.
Conspiracy Prophecy 2017 is a game about resource management, minion management, decision making and humor.

You begin the game enjoying a moment of happiness, congratulating your advisers on having stopped the Mayan End Of The World prophecy of December 21st 2012. Suddenly, terrible news! You are visited by a Fourth Dimensional Cube Being claiming that the world will now end in 2017! Now it's up to you, and your advisers, to find a way to prevent or survive this new End Of The World before it's too late!

Through monthly meetings with your advisers you will solve crises, manage minion armies in the world map and take steps to prevent the End Of The World, from your base on the moon.

Save The World
Imagine the world crisis as a ladder that you climb to win. Each step is an objective that your Order must achieve, but how you achieve it is your choice. Each one of your eight advisers will have their own plan for each step, some of them will cost more resources other will cost more Thralls, others yet will be cheaper but have Stability or Sheeple percentage penalties. The more resources you have to spend at the End Of The World, the higher the chance of success. Not to mention, the happier the Council is with your leadership, the cheaper the entire plan will be. Ultimately it's up to you to manage the Council and make sure you prevent the worst from happening!

Super Tea Studios  [author] Jan 25, 2015 @ 7:04pm
Hey everyone! Per popular demand, we've completely redone the whole look of the game. We're cutting a new trailer and will be showing off some of our favorite Conspiratory events! (Unless the Illuminati decide to replace them with lolcats first).