Greenlight > Games > Transcendent Games's Workshop
Greenlight is being retired. For more information on how to submit games to steam, refer to this blog post.
This item has been removed from the community because it violates Steam Community & Content Guidelines. It is only visible to you. If you believe your item has been removed by mistake, please contact Steam Support.
This item is incompatible with Greenlight. Please see the instructions page for reasons why this item might not work within Greenlight.
Current visibility: Hidden
This item will only be visible to you, admins, and anyone marked as a creator.
Current visibility: Friends-only
This item will only be visible in searches to you, your friends, and admins.
Gender Bender DNA Twister Extreme
Description Discussions35 Announcements1 Comments1412 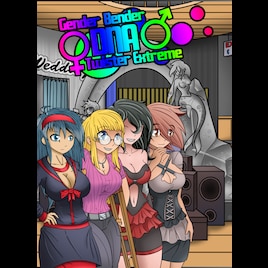 Transcendent Games
Offline
See all 91 collections (some may be hidden)

I've announced a new Gender Bender game this week, which you can check out on Kickstarter and Greenlight below. It's a dating sim with puzzle scenes and life-sim elements, and it features an anime art style and fully animated anime cutscenes. If you liked GBDNATE, you'll like what I've got in store for Max's Big Bust.

Read More
Description
So what is this game about?
Gender Bender DNA Twister Extreme is a romantic comedy visual novel about a group of people who suddenly need to live their lives as the opposite gender. The game features a cast of 13 diverse characters going through their daily lives as a freak accident suddenly changes everything.

How does it play out?
At the start of the game the player chooses which of our cast they wish to follow in their daily lives and they proceed to make choices that lead to different outcomes, endings, and transformations.

Gender Bender DNA Twister Extreme is a fun and silly game about some guys turning into girls, some girls turning into guys, and some of them transforming into other fun things all in the name of SCIENCE!

So Why Greenlight?
After a very successful run on Indiegogo we've completely overhauled the art and story. The game has been available via Desura's Alpha Funding for quite some time now and has been doing quite well. We hope to bring our game to steam so that our game can be made available to a much wider audience.

Current Status
Gender Bender DNA Twister Extreme is still a work in progress. We currently have 4 completed characters out of our planned 13. We update the game as each new character is made available.

1. Yael is a bored university student with a boring part time job in a corporate lab locaed on campus. Just when Yael was about to resign himself to a mundane and uneventful future, his entire life is flipped upside down by the lab accident.

2. Ben has been asking for a raise for a while now. The pay just isn't enough for the ammount of work he does! And it sure wont be enough to compensate for the lab accident!

3. Liam, the lead scientist at Abbadon Pharmaceutical's campus division is having a hard time keeping the lab in check. Things are about to get more out of hand than ever before.

4. Derek has been having trouble keeping his experiments under wraps. How is he going to explain all this spending to the higher ups? From a gender switch serum to a genetic infusion chamber, Derek is about to have the fun of his life.

5. Stephanie has been working for CDG Security for a few years now, she knows the drill for dealing with shoplifters, but she's never had to deal with someone as troublesome as Dina. And troublesome doesn't even begin to describe waking up as a man.

6. Dan, the resident tech expert at Abbadon pharmaceuticals never expected to have to put on a bra in his life. Unfortunately for him, fate and a few other culprits couldn't let that happen. Pop stars, water parks, and brightly lit stages are only a few of the things Dan will have to learn to put up with!

(Currently working on) 7. Zeke owns a local game shop, but sales haven't been doing too well lately. Lucky for him, Lynn seems to know exactly what his business needs to pick up again!
< >
1,412 Comments

my my you're autistic

They aren`t haters. Just smart people. Also, this is Steam, not Newgrounds.

Using "be quiet" as a "insult" makes you look like you seem to not have a good sense of words.

Also, we can`t even program a platform. We can still make something better than this feminst trash.

_Blazing_Guardian_ Nov 15, 2015 @ 11:46am
stfu all of you haters if they want to develop the game then let them do that its their choice not yours besides i bet half of you dont even know how to make games so be quiet!

Xaelath Sep 11, 2015 @ 3:53am
excuse me what the fuck?
Please stop with this ridicolous less than 10 bucks game,
Even if you wrote it its just ugh..
no. Poor art,Literally no gameplay just like VN but do note some VN were voice acted and have some other cool features and ofc worthy.
This one nah? also you should check the game price.

Gender Bender DNA Twister Extreme has been Greenlit and is now listed in the Steam store. For the latest information, purchase options, and discussions for Gender Bender DNA Twister Extreme, please see it on the Steam Store or in the Steam Community.
Visit Store Page
For more details Visit Community Hub
For latest discussions
If you really, really want to, you can continue to the Greenlight page. Information on this page may be out of date, since all the action has moved to the areas noted above.