Store Page
Darkest Dungeon®>  Workshop > A Slightly Startled Seal's Workshop
This item has been removed from the community because it violates Steam Community & Content Guidelines. It is only visible to you. If you believe your item has been removed by mistake, please contact Steam Support.
This item is incompatible with Darkest Dungeon®. Please see the instructions page for reasons why this item might not work within Darkest Dungeon®.
Current visibility: Hidden
This item will only be visible to you, admins, and anyone marked as a creator.
Current visibility: Friends-only
This item will only be visible in searches to you, your friends, and admins. 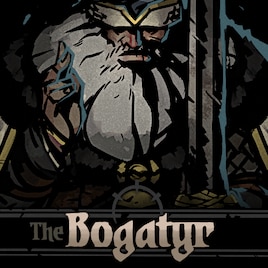 S-Purple
Online
See all 194 collections (some may be hidden)

This item has been added to your Subscriptions. Some games will require you to relaunch them before the item will be downloaded.
Description
Copyright 2020 S-Purple. This item is not authorized for posting on Steam, except under the Steam account named S-Purple/Slightly Started Seal, I do not allow edits and redistribution of my work.

The Bogatyr is tank with focus on stunning, debuffing, and helping his allies. He can be used in the frontline to soak massive hits and set up party-wide stuns, or his talents can be taken to the backline and used for more supportive purposes.

The Bogatyr is a jovial, jolly warrior with a big love for living, fighting, and eating. While he may appear old and feeble, his combative abilities haven't aged a day. He has arrived at the Hamlet in search of a horrid beast that has haunted his dreams. Be wary when traveling with him, as you might just get caught up within his nightmare.

Cold Snap
- - O O | O+O+O+O
Deals low damage and has a mediocre chance to stun. Debuffs damage received by all sources for the rest of the battle and reduces stun chance over 2 battles.

Arctic Clutch
O O O O
Buffs party's crit chance vs stunned as well as stresshealing received from crits for the remainder of the battle.
Gives self a stun chance buff that lasts for 2 battles.

The Bogatyr has access to the three common camp skill in addition to his own camp skills:

The Bogatyr is has a low chance of encountering a mysterious nemesis of his past after camping. Beating this foe unlocks a special trinket and a new flashback sequence that rewards the player. This reward flashback sequence has no limit on the number of times it can appear.

The first flashback can be fought in any difficulty and unlocks the reward sequence for apprentice.

The second flashback can be fought in veteran and champion difficulties and unlocks the reward sequence for veteran.

The third flashback can be fought in champion difficulty and unlocks the reward sequence for champion.

Note: These flashbacks all include the same enemy, and ideally you'd fight them so each flashback is more difficult than the last.

As always, our mods are a work in progress. We'll watch comments for any bug reports and apply fixes as they appear, but if it's urgent, you can find either Miraclebutt or Slightly Startled Seal on Discord: Miraclebutt#8008 or Slightly_Seal#3014.

Special thanks to the community at Clair de Lune's Moonlit Dungeon Discord. If you've ever wanted to make your own mod, want some really rad Darkest Dungeon themed emotes, or just want to take part in a welcoming and active community, check them out at the link below:
https://discord.gg/umYGZu2

Clair let us use a testing channel, which let us find all the kinks of the mod quicker, so another thanks to her as well.
A big thanks to all the playtesters, this mod would have been much rougher without your feedback.

You can also ping either of us on this server if you have any questions about Spurple's mods.

= Translations =
A huge thanks to all the translators:
Russian: Branch with some small changes by Tasty_Yogurt
German: Hollow •Azu•
Schinese: 静春 with some adjustments by nbb

PINNED: Check this out if you're interested in translating
A Slightly Startled Seal

M.E. 9 hours ago
I mean from the kraken society classes?

M.E. 9 hours ago
May I ask which one of the classes made by Slightly startled seal increases the heroes roster?

Yukino Yukinoshita 10 hours ago
Think the boss is a bit overpowered. Without ranged charcters you have no chance of really killing it, and does far to much damage if it procs on all level 1 party. Charater itself is fantastic, but literally cant use him till I get parties able to deal with his nightmare, or else ill just a chance to get party wiped early.

Prosdi_Dude 17 hours ago
i love this char thank you,
good job :)

Naggaboo Feb 17 @ 8:31pm
The aoe stun, the aoe shuffle, high dodge, high hp, self heal with clear dots, 3 actions per turn, that remove his damage modifier, plus frosted strike has a base damage of what i think is 8-13? . Just extremely frustrating to deal with. So many turns wasted on making sure his damage modifier is reasonable with his already high hp pool, high dodge , and a self heal. Also the aoe shuffle and maybe the aoe stress( not sure on that one) doing 1-2 damage for deathblow procs. I just dont understand why a mini-boss is harder than the countess.

Naggaboo Feb 17 @ 8:31pm
After playing against the mini-boss again, it's starting to feel like the boss is drastically overpowered. It feels like a team really needs to be extremely flexible with position, have multiple aoe attacks, in veteran dungeons have high acc, flexible healers, and high damage that isn't reliant on dots due to his self heal. Honestly feels like I can't bring the bogatyr into medium veteran dungeons at all until i level a party up just to deal with this mini boss. Honestly doesn't feel like there's much counterplay to the boss besides making a team with multiple aoe attacks. Also the boss's hp pool is higher than almost every other boss in the game, while also having a heal.

e.g: sword swinging sound, no defined action or "thunk" feel to it, no sound when the weapon actually hits the enemy. each other character's attacks atleast have these 4 things checked (if it hits the enemy); Bogatyr's Sunder only has the first one. not bad but i was suddenly disapointed to not hear any satisfying ice crunching noise or subtle flesh being frozen