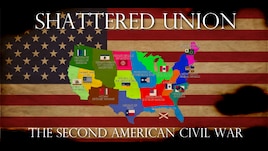 Isaacasm
Offline
See all 5 collections (some may be hidden)

This item has been added to your Subscriptions. Some games will require you to relaunch them before the item will be downloaded.
Description
The premise of this mod is that it takes place in the aftermath of a second American civil war. There are around 20~ factions, basically successor states. Be a trader, participate in the drug trade, conquer cities, raid villages, it's your choice

Big work in progress. Let me know if you come across any bugs or problems specific to the mod.

NOTE 2/3/2020:
University classes have started up again for the spring semester, so I'm not going to have as much time to work on the mod as I did initially. Updates are going to be a bit more spaced out, but I'm aiming for releases once a month.

DO NOT PLAY LATEST UPDATE OR SAVE
Tankerspam

Luisian320 11 hours ago
Thanks for the update, looking forwards to it! I think ill wait until update 3 is out.
Do you know if savegames are working yet?

Isaacasm  [author] Feb 17 @ 9:04am
Update 2 is the latest, update 3 will be releasing hopefully by the end of the month

Luisian320 Feb 17 @ 7:43am
Could you tell us which update has been pushed until now? From description it seems like Update 1 only?

Ⓨ YGC | Kinith Ⓨ Feb 16 @ 8:36am
So i'd like to ask what event would have lead to so many secessions? i'd think that the "Federal Republic" would still hold the illusion of being the original government and be called "the Federal Government of Columbia" or something but not "Mid Atlantic". it'd be nice to have an idea of what governments are allied with each other like what stops the republic of California from taking some territory from Nevada or Oregon. Same with Texas and south Oklahoma. Still haven't played it so if some of that is there then good on you. Look forward to hoping in.

Isaacasm  [author] Feb 16 @ 7:44am
the reason why some of the states are split (like Idaho) is to simulate conflict post-secession, one such conflict is occuring between Cascadia and the Rocky Mountains. I however, take a map of the sub-divisions of culture within the United States into consideration when deciding these conflict areas

delliottvp65 Feb 16 @ 4:30am
as an Oregonian we do not like Washington and would be at war, and Idaho would've been conquered by us, so I'd be more like "The communist Rednecks" if you and make a more country appropriate name from that and correct the problem that be very nice, everything else is awesome and the mod is beautiful

the toe gremlin Feb 12 @ 5:40pm
As a Washingtonian, I can say it probably would be more split, with Eastern Washington east of the Cascades joining the Rockies, and Western Washington going with the whole "cascadia" idea.
< >